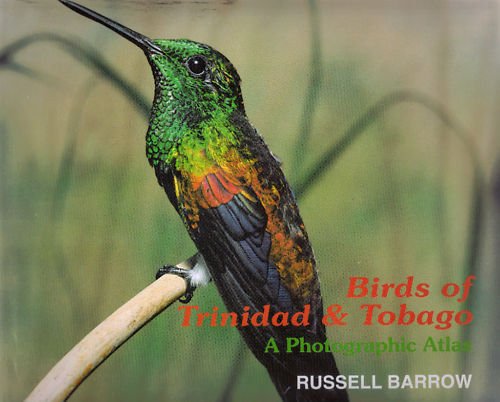 Trinidad and Tobago is one of the world’s most rewarding countries for birders, with 432 species in a small and easily accessible land area that ranges from mountain and rain forest to coastal swamps, plains, beaches and offshore nesting colonies. In the birding world, Trinidad and Tobago is therefore well known for the number, range and accessibility of its bird species.

In this book, fully revised in 1997, Dr Russell Barrow presents a cross-section of the country’s birds from widely differing habitats, concentrating on the most colourful, rare and representative species.

Featuring over 170 photographs, each photograph is accompanied by a short description based on first-hand experience, pointing out identification features, likely locations, behaviour patterns and unusual characteristics. Each species is cross-referenced to maps of the islands to show the best sites for observation. There is also a section on photographic techniques used to capture birds on film in the wild.

This is a book that will delight the novice as much as the experienced birder, and will appeal to anybody with a general interest in wildlife and birds.

Ever since I read a fascinating book, Journey to the Red Birds, I have longed to see these glorious sights for myself. Now we have the next best thing: Dr Barrow’s wonderfully illustrated book.
– Dennis E. Rhodes, British Library

About Birds of Trinidad & Tobago

Dr Russell Barrow (1924–1997) was a medical doctor specialising in Radiology. He was a keen photographer since childhood, and produced work in astronomical deep-sky photography as well as in portraiture and landscape. In his latter years he turned to nature photography, specialising in birds. He won the title Nature Photographer of the Year, awarded by the Photographic Industries Association of Trinidad & Tobago, for three consecutive years. His nature pictures have been exhibited in many parts of the world including Canada, Britain and South Korea.