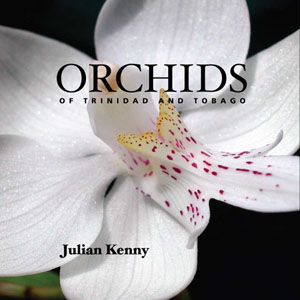 “As we sat in a meadow beside one of the lakes, he pointed out a small, almost leafless plant amongst the grass. It was an orchid …”

There are 200 or so orchid species in Trinidad and Tobago. Some are a common sight, sprouting happily on telephone poles. But others are known only through a single specimen discovered in the wild by Julian Kenny.

The rarest and the most familiar of these flowers are both displayed here in over 100 colour photographs taken by Professor Kenny over 50 years. Orchids of Trinidad and Tobago will delight the serious collector and grower as much as the admirer of natural beauty.

In the hands of Prof Julien Kenny the topic of orchids becomes fascinating. For most of us these are somewhat mysterious but boring plants which happen to bear exotic flowers. But the former professor of zoology at the University of the West Indies, St Augustine, campus lifts the topic out of the mundane with his recently released Orchids of Trinidad and Tobago. Both the rarest and the more familiar of these flowers are included among over 100 of his colour photographs. It’s a record of over 50 years of lovingly and expertly documenting and collecting orchids … Kenny approaches the topic with all the reverence of a lover on a first date, so that from the book’s preface one is gripped with the words…”

About Orchids of Trinidad & Tobago

Julian Kenny was a former professor of zoology at the Trinidad campus of the University of the West Indies. His books include His books include Native Orchids of the Eastern Caribbean; Views from the Bridge (on freshwater fish); Views from the Ridge (exploration in natural history); Flowers of Trinidad and Tobago; and A Naturalist’s Notes: the Biological Diversity of Trinidad & Tobago. He passed away in August, 2011.