The Old House & the Dream: the Story of the Asa Wright Nature Centre (Joy Rudder) 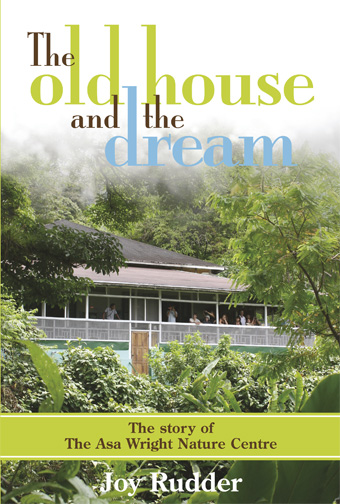 Listed by Audubon as one of the top ten eco resorts in the world, the Asa Wright Nature Centre has been billed by many as another Eden. Nestled in the Northern Range of Trinidad along the Arima Blanchicheusse road, the Centre now boasts over 1,000 acres of protected land and many endangered species and a dazzling array of birds including the rare nocturnal oil birds. The story of the centre, spans many generations and is a tale of many fortunes lost and won, between World Wars and other forms of unrest that touched Trinidad and neighbouring South America.

The centre’s genesis was the result of the coming together of an unusual mix of distinctive people, from the famous scientist and explorer Dr William Beebe who made his last home in the Arima Valley to the gifted bird artist Don Eckelberry and his equally vivacious wife Ginnie, and the warm hearted American benefactor Jonnie Fisk. Together with local naturalists, visiting scientists, committed members of the Audubon Society as well as international ornithoogists and willing workers from the Arima valley, a place that might have been lost to the hillside quarries or growing housing developments was saved to become this world-renowned nature centre.

A strange and dazzling array of forces brought to Trinidad’s shores some of the key players who actually had a hand in getting the centre started and keeping the dream of its existence alive. Adventure, passion, rage, disappointment and commitment run through the lives of these protagonists who made the dream of establishing the nature centre a reality that continues to unfold today.

Asa Wright herself was a larger than life character hailing from Iceland with the blood of Vikings in her veins. She had married an English Solicitor who had been poisoned in the trenches in World War I, and who wrote poetry while bombs fell on London where he was stationed in World War II. It is a tale of survivors of all kinds who came together, worried and warred and loved and worked, sacrificed and quarreled but in the end built a lasting legacy in the form of the Asa wright Nature Centre. The lives of previous owners of the Springhill estate as well as the present day staff are also remembered in this unusual and very readable human history of a one-of-a kind place in the world.

The Old House and the Dream is also a remarkable tale that gives a unique example of the price that sometimes is paid to make a dream come true.

If you’ve not read this book already, put it down on your reading list for 2011, you should find a copy… Joy Rudder’s book should be required reading for all, and especially for those who have never visited the Centre to learn what riches there are in the natural world of Trinidad — and how near we are coming to losing a real national treasure.

In her book, The Old House and The Dream, writer Joy Rudder provides the reader with an intimate look at Asa Wright herself. Readers can look forward to more than just a history lesson… The book has already been hailed as a ’must read for nature lovers’ as it tracks the growth of the Centre from the family home it once was to the sacred ground it now is for bird enthusiasts.

About The Old House & the Dream

Joy Rudder has worked for over thirty years as a writer and environmental education consultant. Some of Rudder’s books include: Our Native Land and Glimpses of the Blue Caribbean.