Economic transformation in the energy sector in Trinidad and Tobago would require two principal initiatives: raising the current level of crude oil production, and adopting renewable energy as an essential element in energy activity.

The first is probably easier and quicker to implement. 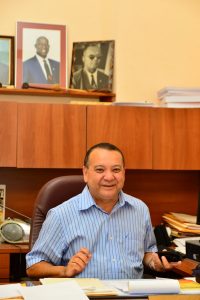 Current crude oil and condensate output is around 72,000 barrels a day (b/d). Raising that requires more development drilling by the upstream companies.

At the very least, they should attempt to maintain that level in 2018. That means that state-owned Petrotrin, which, together with contracted services, accounts for about 58% of total production, must up the ante.

Petrotrin needs to be more active in its Trinmar acreage in the Gulf of Paria, and has indicated that it will be sinking five exploration holes there this year. On its land acreage, another five exploration wells will be drilled by lease operators and farm-out operators.

BHP sank the Le Clerc 1 well in May-August 2016 as the first of two exploration holes required during the first phase of the Block TTDAA 5 production sharing contract. The result was preliminarily classified as a natural gas discovery.

All this activity has convinced the energy and energy industries minister, Franklin Khan, that “the outlook for the domestic energy sector in 2018 is reassuring.”

On the gas side, about 1.7 trillion cubic feet (tcf) is likely to be lifted this year.

While minister Khan is happy about all this, he is not so pleased about the amount of revenue the government gains from this output. The government, he says, is therefore “reviewing the taxation system and the suite of allowances available to oil and gas companies.”

This process began with the royalty rate on production, which was raised to 12.5% in January. Other tax changes will be announced in due course.

The minister has reassured the industry that “the government is receptive to, and welcomes, foreign investment” – but with the caveat that “there must be an equitable sharing of revenue earned from the exploitation of our hydrocarbon resources.”

The UK’s Poten and Partners, in its Gas Master Plan report, highlighted the “great disparity in value”, as minister Khan put it, “between that which the government received, as compared to that received by energy companies and their affiliates from the monetisation of the country’s hydrocarbon resources.”

He gave as a sterling example the revenue impact of the liquefied natural gas (LNG) trains in Point Fortin. The “potential value loss from the four LNG trains averaged around US$6 billion a year between 2011 and 2014, which is a staggering figure,” he explained.

Poten and Partners found that “the beneficiary of the substantial value generated by the trains was not so much the upstream gas suppliers but rather the offshore jurisdictions, which were either low-priced markets or high-priced markets, but with the revenue not flowing back to Trinidad and Tobago.”

In the majority of transactions, it was found that “the offtake arrangements for upstream companies involved sales to downstream marketing affiliates, which potentially led to non-arm’s length transactions.”

As far as renewable energy (RE) is concerned, Trinidad and Tobago has been a late convert. Minister Khan acknowledges this. “Trinidad and Tobago recognises the benefits that would accrue from the diversification of its energy mix” – but he points out that it is “the only country in the western hemisphere that generates 100% of its power from natural gas, the cleanest of the fossil fuels.”

According to the minister, a “suitably qualified international firm, together with a joint venture local partner, will be required to design, build, operate, maintain and fund RE projects greater than, or equal to, 3MW for grid integration.”

RE comes basically from the sun and the wind, but there is also the more esoteric waste-to-energy approach. Once there is a landfill, waste-to-energy becomes a possibility. The minister confirms that “expressions of interest have been issued for the development of a waste-to-energy facility at the Beetham Landfill for the conversion of municipal waste for power generation.”

Trinidad and Tobago is a signatory to the Paris climate change agreement, which mandates it to “reduce cumulative greenhouse gas emissions from power generation, transportation and industry by 15% by 2030, relative to a business-as-usual baseline.”

“As part of our strategy of reducing greenhouse gases, the government is aggressively promoting the increased utilisation of CNG as a major transportation fuel,” minister Khan states.

“Based on this commitment,” he adds, “the grant of fiscal incentives benefiting a cross-section of participants, ranging from individuals to installers, and a competitive price compared with liquid fuels, have encouraged an upsurge of interest in the adoption of CNG as a transportation fuel of choice.”

Petrotrin has been told “to accelerate its enhanced oil recovery programme, especially the CO2 injection part of it.” The minister believes this initiative will have a “two-fold effect – boosting oil production and reducing our carbon footprint.”

Minister Khan admits, however, that “there is still a lot of work to do. We are in the process of finalising negotiations with our Venezuelan counterparts for a tranche of gas from their Dragon field and for the sharing of production from our cross-border fields, Loran-Manatee, Manikin-Coquina and Kapok-Dorado.”

The culmination of these developments, he says, “will bring a new and added dimension to the gas business in Trinidad and Tobago, particularly when combined with our proposed Caribbean energy diplomacy interventions.”

As published in the first issue of the rebranded CONTACT Magazine, produced by MEP for the Trinidad & Tobago Chamber of Industry & Commerce. Read the full issue here, which was unveiled at the Chamber’s April 2018 AGM