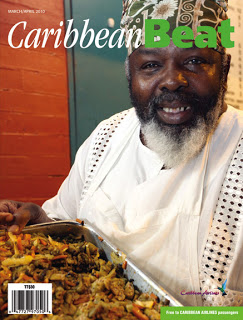 The current Caribbean Beat magazine contains some tasty morsels—the March/April issue is dedicated to food, some familiar, and some fresh and surprising.
Visitors to the region might be surprised to encounter Arabic food here. But as Skye Hernandez explains, the Syrian-Lebanese community has enriched the culinary and cultural heritage of the Caribbean for a century now. In recent years, it’s become easier to sample the delights of baba ganoush and tabbouli, felafel and fattoush.
Older local traditions may be in danger of disappearing, if they’re not handed down from one generation to the next. But Indo-Trinidadian recipes have been perfectly preserved in a cookbook by Kumar Mahabir and Mera Heeralal, and Jonathan Ali leafs hungrily through its pages.
Any West Indian is familiar with dasheen, a heavy, filling root vegetable—but that’s just one of its many disguises. So versatile is this vegetable that in Tobago, it’s become the basis of an annual Blue Food Festival. Lasagne and liqueur, dasheen cake and dasheen chow mein—BC Pires samples them all, and reports back from the frontlines of food writing.
Further afield, Franka Philip combs London in search of the perfect patty, encouraged by reports that this elusive object is occasionally spotted outside its native habitat of Jamaica. Can she hunt down the right combination of a spicy, meaty filling, Scotch bonnet pepper, and the flaky yellow crust?
If it’s the perfect roti you’re after, check out Pam’s Kitchen—if you’re in Seattle, that is. When Pamela Jacob moved from the plains of Caroni to the Pacific Northwest, she took Trini traditions with her. Since then, Pam’s aloo pie, bus-up shut and coconut bake have starred on television—but they haven’t lost their home-made flavour, Debbie Jacob discovers.
If you’re too far away to drop by Pam’s Kitchen, you can pick up a snack somewhere else. Caribbean Beat’s writers review three new guides to the street food of Trinidad & Tobago, Barbados, and Jamaica. You’re bound to find something there to tempt your tastebuds, from ghetto steak to steppers. And you can finish off your meal by learning lessons for life from a cup of tea, thanks to Leone Redman.
Eaten too much? Walk off the excess on a stroll round Carriacou, a gem of an island in the Grenadines. Paul Crask is your tour guide in our travel section.
Meanwhile, Garry Steckles reveals how Calypso Rose once fell among thorns, when she was kept back unfairly in competition with male calypsonians. But Rose not only cleared a way for herself, but also blazed a trail for other women as she claimed her rightful place at the top.
Other Caribbean artforms are celebrated too in Caribbean Beat’s regular roundup of events, music and books that are representing the region right now.