The Caribbean premiere of Carnival Medea: A Bacchanal is gearing up for its third and final weekend immediately after Carnival, playing Saturday 4 and Sunday 5 March at the Little Carib Theatre.

A production of Lordstreet Theatre Company, co-written by Dr Shirlene Holmes (Georgia State University) and T&T’s Rhoma Spencer (who also directs the production), Carnival Medea retells the classic Greek tragedy of Jason and Medea using T&T’s traditional mas characters. The Grenadian Medea, a Baby Doll, flees Carriacou with Jason, a Tobagonian stickfighter, to live in Trinidad. After some years of marriage, he forsakes her to marry a younger woman. Distraught, she seeks revenge on both Jason and his new bride. The production is set in T&T in the 1950s, with the actors bringing to life traditional masquerade characters like the Baby Doll, Pierrot Grenade, Dame Lorraine, Midnight Robber, and Batonye.

The play was originally being written by Holmes who, in 2002, invited Spencer to serve as dramaturg. However, in 2014 when the play was staged at Georgia State — and where Spencer continued to work on it as a visiting fellow — Holmes insisted Spencer be its co-author, as her dramaturgy had extended to rewriting and writing new scenes. The play was later presented at the Edinburgh Fringe Festival in Scotland in 2015, before making its Caribbean premiere in Trinidad this Carnival. 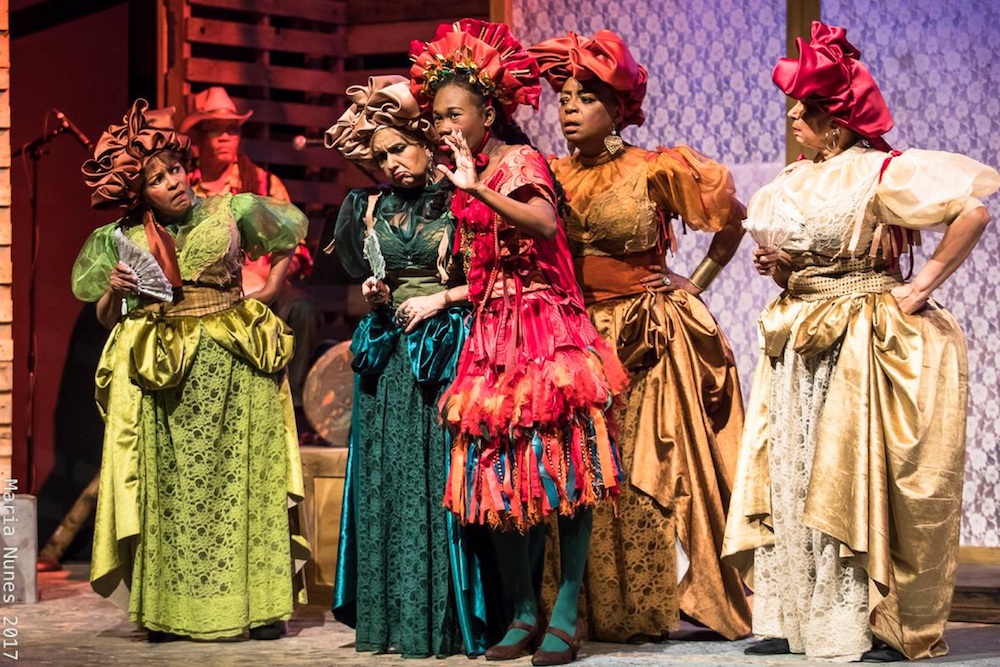 The run is dedicated to the memory of the late Joyce Wong Sang (the original coordinator mandated to oversee the Best Village Trophy Competition competition by her brother-in-law, the late Dr Eric Williams, and who passed away on 14 January). Rhoma Spencer, who got her start in the Best Village competition, said Wong Sang single-handedly mobilised the villages across Trinidad & Tobago to come together in the performing arts, horticulture, and the culinary arts.

A member of the Barataria Community Council from 1980 to 1999 — where she began as a performer and later playwright, director, lighting designer, and makeup artist — Spencer’s works are continuously inspired by her Best Village training. “Summer intensives at the Creative Arts Extra Mural Summer Camp, organised by the University of the West Indies, were basically populated by Best Village practitioners. There was training in drama, acting and improvisation, and dance by practitioners like Sonya Moze, Belinda Barnes, Valerie Bethel, Noble Douglas, to name a few. These were members of the faculty that were passing down their own expertise in their field of discipline to the common Best Village performer. As a result of that training, we went back to our communities a little more informed in our particular discipline and we were able to take our performance skills to another level when competition time came around. Part of our prizes were scholarships to go and study theatre at the Jamaica School of Dance, the Jamaica School of Drama, or the Edna Manley School of Visual Arts, even as far as New York University,” she explained.

It is for all these reasons she has opened up Carnival Medea’s preview performance to Best Village practitioners and community groups. She said she hopes that practitioners will see how “one can take and use original text and adapt it to some of the characteristics of what we know as Best Village, which is music, dance and drama, and how all this is incorporated in the staging of a production”.

Christopher Sheppard, the choreographer of the production, is also a Best Village alum, having worked with the Lower Morvant Best Village Group, and today still works as a tutor.

Barbadian actors Sonia Williams and Levi King are among the Carnival Medea cast. Williams — who is a performer, theatre director, writer, educator, inspirational speaker and activist — plays the role of Nen/Mama Neza. “It’s a spiritual and growing experience for me. The play is a wonderful play and I like the structure of the piece. I’m very excited to be in Trinidad again to perform it and to experience the culture and people of Trinidad,” she said.

King, who plays the role of Tan/Chantwelle, is an award winning actor and director, as well as a singer and songwriter. It’s his first time in Trinidad and the first time he’s traveled to do this type of work. “I think it’s a wonderful opportunity to open some doors, not just for myself but possibly for other theatre practitioners where I come from. I really love this script and the treatment of it. I love how they took the ancient Greek play and added the Caribbean and Orisha elements to it. I think that is a wonderful blend of cultures.”

The decision to audition Barbadian actors was made after Spencer was approached by Amanda Cumberbatch, Theatre Officer at the National Cultural Foundation (NCF) of Barbados to conduct auditions via Skype. Cumberbatch said she made the suggestion because she believes an initiative like this is vital to the future of regional theatre. “We are all small nations with limited markets for the arts. As such, inter-cultural opportunities like this create a necessary ‘next step’ for performers, where actors can work more, earn more, and gain wider exposure. It will also encourage regional performers to become more proficient in pan-Caribbean approaches — learn each others’ accents and vernacular culture, our ways of doing things.”

CEO of the NCF, Cranston Browne, said the Foundation is pleased to partner with Lordstreet Theatre. “Local actors stand to benefit from the creation of an infrastructure that facilitates working in other Caribbean territories. This means greater employment opportunities, exposure to the expertise of specialists from other parts of the region, and through contact with them, an expansion of skills and capacity. Ultimately, this will make our actors more marketable, and further develop the industry’s network.”

Editor’s note: this headline originally read “…for final four nights”, with shows 2–5 March. The schedule was revised to two nights, 4 and 5 March.

David Renwick, the veteran Trinidadian journalist who died yesterday, was a longtime and much valued friend and business partner of… Keep readingRemembering David Renwick