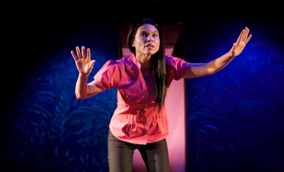 It’s an old Caribbean favourite – Jamaica Farewell – and it’s been touring the US starring Debra Ehrhardt. Its next stop is New York City, playing the Bronx and Brooklyn on 21st and 22nd April, having recently sold out performances in Windsor, CT and Somerset, NJ.

The play has won praise from US media outlets like The New York Times, Washington Post, and New Yorker. Sources close to the show claim that Rita Wilson, wife of Tom Hanks, suggested to her husband its potential as a motion picture after viewing one of the performances on the US national tour.

Debra Ehrhardt, born in Kingston, Jamaica, is the recipient of two NAACP Image Awards. One of her productions, Invisible Chairs, was produced by David Strasberg at the Marilyn Monroe Theater in West Hollywood, and later optioned as a situation comedy by Fox.

Jamaica Farewell plays 21st April, 8pm, at the Philip Sousa MS in the Bronx; and 22nd April at the Tropical Paradise Ballroom
in Brooklyn. Tickets are $42 each. For more information, call (718) 941-1879, or visit www.everybodysmag.com.

Caroline is an editor and staff writer at MEP. She is also on MEP’s board of directors, and moonlights as an actor, singer, and director. She’s passionate about telling stories – on the page, on the stage, on screen – and in particular about documenting Caribbean lives and events. She’s currently trying to master unplugging from her iLife… For more: https://www.carolinetaylor.info.