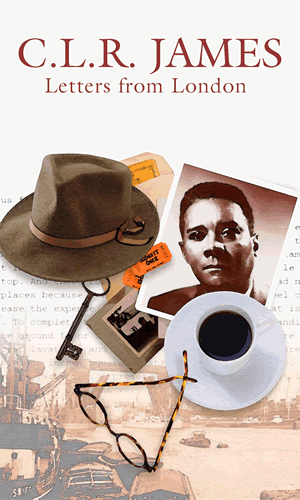 “The diverse elements poised in James’s constitution in 1932 are to be a source of intense personal battles later, when his political and social consciousness is more strictly and technically developed. Since he is a good observer, some of the things he notices turn out to be of critical importance in his evolving vision of politics, society and the individual.”
– Kenneth Ramchand, Professor Emeritus of West Indian Literature, University of the West Indies, in his introduction to Letters from London

In 1932 CLR James left his home in Trinidad for the first time and sailed to the United Kingdom to fulfil his literary ambitions. He was 31 years old. During his first weeks in London he wrote a series of vigorously opinionated essays for the Port of Spain Gazette, giving his impressions of the great city and its inhabitants, and describing his progress through the Bohemian circles of Bloomsbury.

Letters from London collects these essays for the first time in seventy years. It is an essential record of a crucial period in James’s life. His London is an intellectual ferment of politics and poetry and all-night conversations in boarding-house rooms, peopled by radical young Englishmen and liberated young Englishwomen, and students from every reach of the British Empire.

As the education and manners of his colonial upbringing are tested in this heady atmosphere, we sense the emergence of the revolutionary C.L.R. James who was to become a major intellectual figure not just of the West Indies but of the world.

This series has in it James’s whole life work…. Indispensable to any conception of James as a writer.

Prospect Press‘ newest book, a small collection of essays by CLR James, Letters from London, is a delight for his fans.

Historian of revolution, Marxist philosopher, novelist, activist, and critic, CLR James (1901–1989) was a major intellectual figure of the 20th century. Born in Trinidad, he spent most of his life outside the Caribbean, working with various revolutionary movements in Britain and the United States. His classic works include American Civilization, Beyond a Boundary, and Mariners, Renegades and Castaways.

I have been living in London for ten weeks and will give what can only be called first impressions. I have been living in Bloomsbury, that is to say, the students’ and young writers’ quarter. It is different from Clapham or Ealing—suburbia, as you can imagine—and is in its way distinctive, so absolutely different from life in the West Indies that it stands out as easily the most striking of my first impressions. In later articles I shall go more into detail about such things as have struck me—houses, food, clothes, men, women, the streets, scores of things. But for the present my chief concern will be with Bloomsbury and the Bloomsbury atmosphere. I shall best describe it by not trying to describe it at all, but by merely setting down faithfully the events of three or four days, just as they happened….

Restlessness was the only reason which made me go to a lecture at the Student Movement House by Miss Edith Sitwell. I had promised to go with a girl whom I have met here, extremely interesting, and the only person I have ever met who, if we are looking down a book or newspaper together, has to wait at the end of the page for me, and not by three or four lines, but sometimes by ten. I had almost intended to telephone to say that I was not going, but the prospect of my own company in a room of a Bloomsbury lodging house, aesthetically speaking one of the worst places in the world, made me decide to summon up some energy and go to hear Miss Sitwell. I went over to my friend’s room and met there herself and another girlfriend of hers who had ridden five miles to come to the lecture, and was going to ride five miles afterwards to get home. We walked over to the Student Movement House, which is a club for London students, white and coloured, but with its chief aim giving coloured students in London an opportunity to meet together and fraternise with English students, and with one another. The atmosphere of the place is decidedly intellectual, in intention at least.

Now I had heard a lot about Miss Edith Sitwell before. She is supposed to be eccentric, in appearance and manner at least. She and her two brothers, Osbert and Sacheverell, are a family of wealthy people who have devoted themselves to literature (chiefly poetry) and the arts. They have made quite a name for themselves as poets and critics, and although few modern writers have attracted such a storm of hostile criticism, yet that in itself is perhaps a testimony of a certain amount of virility in their work. Today, however, they have won their position and are among the first flight of the younger generation of English writers. Miss Edith Sitwell, I had been told in Trinidad, rather posed. She wore robes, not dresses, and, to judge from her photographs, was not only handsome but distinctly evil-looking in appearance. She had an underlip that seemed the last word in spite and malice, and in nearly every photograph that I had seen a rebellious lock of hair waved formidably about her forehead.

At a quarter past eight there was the usual whisper and the lady walked into the room. If ever rumour had been lying, this certainly was a case. She did wear robes, some old brocaded stuff, dark in colour with a pattern of some kind. The waist was about six inches below where the waist of the ordinary dress is and the skirt was not joined to the bodice in a straight line but by means of many half circles looking somewhat like the rim of an opened umbrella. Women will know the kind of design I mean. But the chief thing was that she could carry the dress. She is tall and, though mature, still slim, and the dress fit beautifully. But even more remarkable than the dress was the face, a thin, aristocratic, well-formed face, very sharp and very keen. The lip I saw later did look spiteful at times but it was only when she shot an arrow at some of her fellow poets and writers, and, to speak the truth, she had a good many to shoot. The lock of hair I can say nothing about, because she wore a small white cap which would have kept the most rebellious locks in order. She stood on the little platform to address us, a striking figure, decidedly good-looking, and even more decidedly a personality. Perhaps the outstanding impression was one of fitness and keenness together, the same impression I had got from a bronze head of her brother I had seen in the Tate.

I do not intend to go into her lecture, which consisted partly of readings from her own and other works and partly of short dissertations on certain aspects of modern work, the Sitwells being essentially of the modern school. Her voice was not exceptional and she was rather hoarse but she read well. Most interesting to me, however, were the bombs she threw at writer after writer. For a sample, Mr. D.H. Lawrence, who would be judged by most people the finest English writer of the post-war period. Miss Sitwell (sparkling with malicious enjoyment) told us that in the course of a lecture at Liverpool she had defined Mr. Lawrence as the chief of the Jaeger school of poetry. This was reported in the press and a few days afterwards she received a dignified letter from the famous firm of underwear makers, saying that they had noted her remark and would like to know what she meant by that reference to their goods.

Miss Sitwell replied that she had called Mr. Lawrence the head of the Jaeger School because his poetry was like Jaeger underwear, hot, soft and woolly; whereupon the Jaeger Company replied that while their products were soft and woolly they begged to deny that they were in any way hot, owing to their special process which resulted in non-conductivity of heat. Miss Sitwell begged to apologise and asked the Jaeger Company if they could discover a special process for Mr. D.H. Lawrence which would have the same effect of non-conductivity. Unfortunately, Mr. Lawrence died too soon and nothing could be done. That is a sample of the kind of compliment she distributed, and it is only fair to say that she and her two brothers, if they give hard knocks, have received quite as many. Naturally, I was very much interested in all this and soon realised that I had done very well to come. But more was to follow. Speaking of D.H. Lawrence, she said that she did not think much of his work on the whole, that even his novels were very much overrated, and she knew a young American writer of 31 or 32 who was a far finer novelist than D.H. Lawrence. However, wild horses would not drag his name from her.

Of course, that was easy. I told her at once that it was William Faulkner and she rather blinked a bit though honestly I do not think there was much in it. Anyone who is really interested in fiction would at least have heard Faulkner’s name….