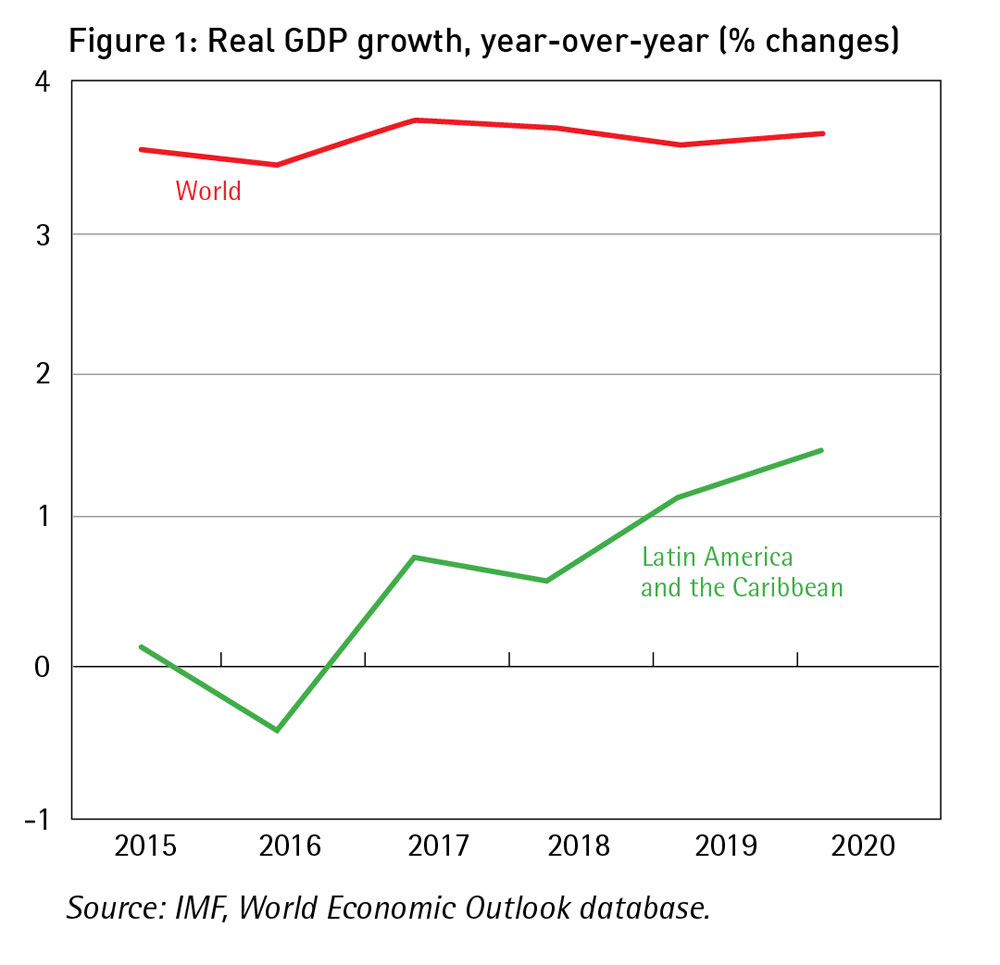 By the Trinidad & Tobago Chamber of Industry & Commerce

Latin America and the Caribbean

Economic activity in Latin America continues to increase, but at a slower rate than anticipated. The weakening global economy and rising policy uncertainty are contributing to the slowdown in Latin America’s growth momentum. Overall, the region is still expected to advance by 2% in 2019 and 2.5% in 2020 (see Table 1).

A tightening of global financial conditions and lower commodity prices brought on by United States-China trade tensions is continuing to contribute to the region’s slowdown. In addition, monetary policy was tightened in some economies to contain inflationary pressures stemming partly from currency depreciation, which further dampened growth.

As the global economy slows, the narrow window of opportunity to complete regional reforms is closing. The creation of debt and deficit reduction mechanisms will need to continue in several countries to ensure debt sustainability and minimise the adverse effects on economic activity and poverty. These developments should include the protection of infra-structure for regional investment and well-targeted social expenditure, while cutting non-priority spending.

Economic activity in the Caribbean is still projected to pick up in 2019-20, due to robust tourism from the US, reconstruction from the devastating hurricanes of 2017 in some tourism-dependent countries, and higher commodity production in some commodity exporters (see Figure 1).

In December 2017, the European Union (EU) published its first blacklist of tax havens, in an attempt to foster good global tax governance. It contained 17 countries; updated in March 2019, it now contains 15 countries. EU member states accumulated over 12.5 trillion in government debt, or 82% of the EU’s GDP, whilst EU-blacklisted countries on average carry government debt at 61.3% of GDP – 20% lower than the projected EU average, despite the EU having higher than average corporate tax rates.

The list includes Aruba, Barbados, Belize, Bermuda, and Dominica. They join Trinidad and Tobago and the US Virgin Islands, which were already on the blacklist. “The blacklist of tax havens has proven a true success, with many countries having changed their laws and tax systems to comply with international standards,” the EU said. Over the course of 2018, the commission assessed 92 countries based on three criteria: tax transparency, good governance, and real economic activity, as well as one indicator, the existence of a zero corporate tax rate.

“Local businesses will continue to benefit from the duty-free export of goods and the preferential treatment of services exports to the United Kingdom,” said Trinidad and Tobago’s Minister of Trade and Industry, Senator Paula Gopee-Scoon, as she announced her country’s decision to sign the Economic Partnership Agreement between CARIFORUM and the United Kingdom (CARIFORUM-UK EPA).

Global manufacturing activity and trade showed continued signs of weakness at the start of 2019; in contrast, activity in the services sector has been resilient. Some emerging markets and developing economies are currently facing negative conditions that are hindering growth, while others are benefiting from the easing of some external financing conditions.

Companies within the US added 196,000 jobs in March 2019, marking a significant rebound from poor growth in February. Earnings data showed that the annual rate of wage increases slowed to 3.2% in March. The healthcare sector saw jobs rise, but the retail and manufacturing sectors both saw declines.

Even though the US experienced employment growth, it can be seen as a mixed report since 6,000 jobs were lost in manufacturing, the first decline in the sector since July 2017.

The US accused China of stealing intellectual property from American firms by transferring American technology to China. Washington wants Beijing to make changes to its economic policies, which it says unfairly favour domestic companies through subsidies and other support mechanisms. It also wants China to buy more US goods to rein in a lofty trade deficit.

In April, US President Donald Trump said the US had achieved agreement on some of the toughest points in trade talks with China; if the deal is finalised, a summit will be hosted with China’s President, Xi Jinping. Failure to achieve a deal may see the US more than double the 10% tariffs on US$200bn (£153bn) of Chinese goods and impose fresh tariffs.

Rest of the world – FDI

According to FDI Intelligence, countries of the Asia-Pacific region are the leading destination for greenfield FDI (where a parent company builds its operations in a foreign country) in renewable energy, while the US is the top country, Dubai the top city, and Germany the top source of investment.

Business lines dedicated to the development of energy production from renewable sources, such as Enel Green Power (Enel Group) and Canadian Solar, were the most active investors with 27 FDI projects each, followed by Canada’s SkyPower and Spain’s Acciona Energy.