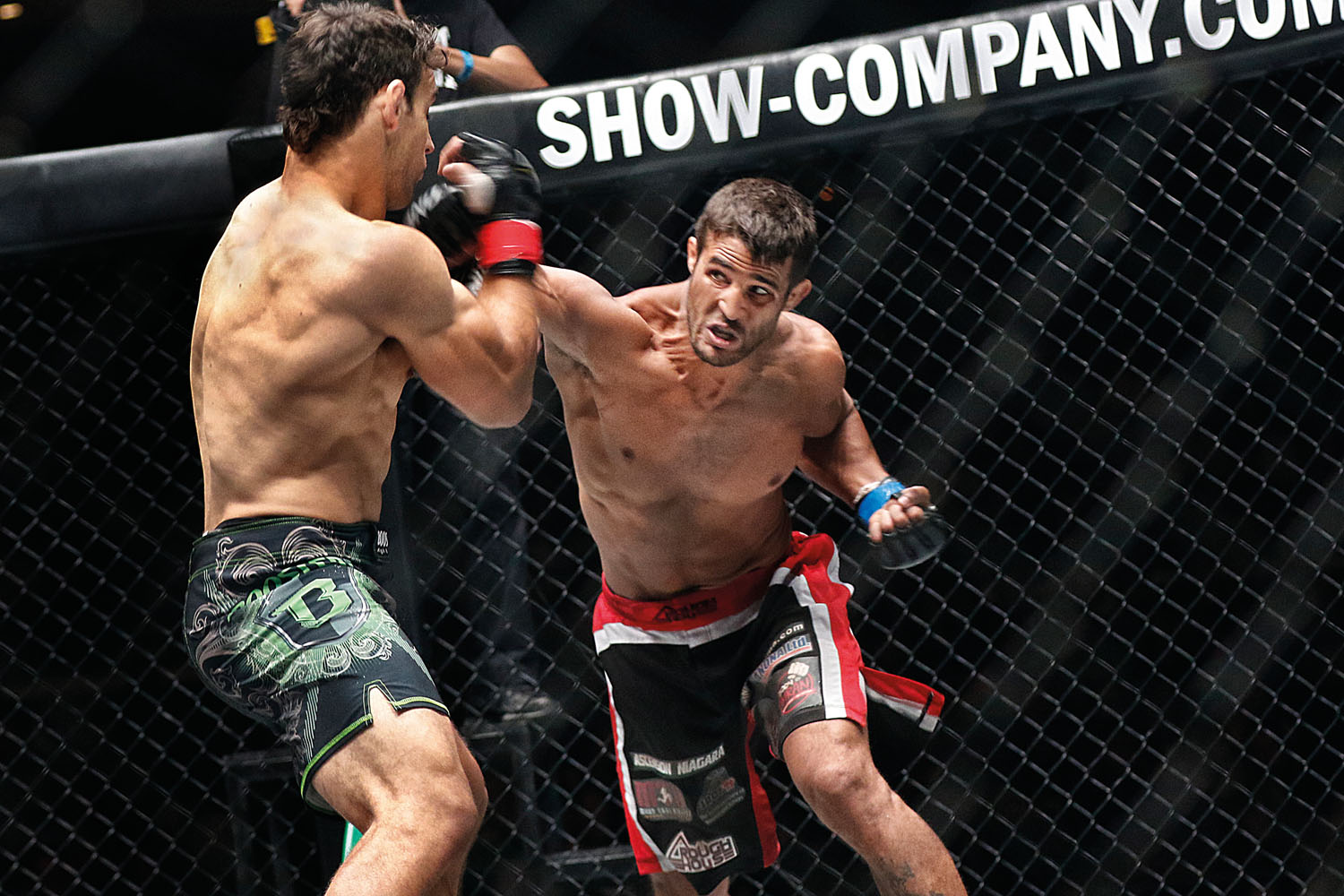 Mixed martial arts (MMA) has been on a meteoric rise, driven by the penetration into mainstream pop culture of globally recognised stars such as Conor McGregor, Ronda Rousey, Jon Jones and Anderson Silva. It has challenged boxing as the world’s premier combat spectacle. Renaldo Matadeen delved into the local scene and found that in Trinidad and Tobago, MMA continues to punch above its weight, slowly making strides despite a lack of resources and support

Since the early days in the 90s, when kickboxers and boxers were basically “trying a thing”, few would argue that the sport has come a long way. That’s what martial arts expert Bharat Ramoutar, the former coach of local female pioneer Ria Ramnarine, firmly contends.

Top local MMA fighter Joash Walkins, 29, believes T&T has the potential to produce world-class athletes, but admits it’s imperative for some things to change. “We could be a lot better in Trinidad, but we’re a little too divided amongst ourselves,” he says. “If we had more unity within the sport, we could reach the top, because we have the potential. We have great potential here, we are natural athletes.”

Walkins, nicknamed “The Honey Badger” for his resilience, has a 13-1 MMA record. But he considers himself a “back-ah-yard world-class athlete” because the specialist training his opponents enjoy – physio, personal chef etc. – are luxuries he can only dream of. He pays tribute to local stalwart Dwayne Hinds, whom he credits for making him an all-round fighter, something athletes at the Rough House establishment would surely testify to.

Hinds, a former Caribbean champion, went undefeated in 10 fights from 2009 to 2013 before losing for the first time in 2014 and then retiring. His influence, however, can be seen in the multitude of guys choosing the sport as a career.

“He’s my brother and my role model,” adds Walkins, who currently runs his own martial arts school, teaching kickboxing and grappling. “He’s the guy that brought me to this level from 2012 to now. He’s an expert at wrestling, and I learned a lot of grappling knowledge from him. He’s truly a grappling icon.”

Bharat Ramoutar, founder of Fine Line Fight Factory in Chaguanas, recalls how difficult it was at first to get people to buy into the sport in the Caribbean. He also pays tribute to Hinds. “While he didn’t win any big titles – he won a couple of regional titles, I think – he was our most experienced MMA fighter. He had a good record before he was defeated. He was like the flagship at MMA at the time, and everybody looked up to him. I remember matching him against a Canadian fighter and he did really good. He was one of the guys we thought would have gone on to do big things.” 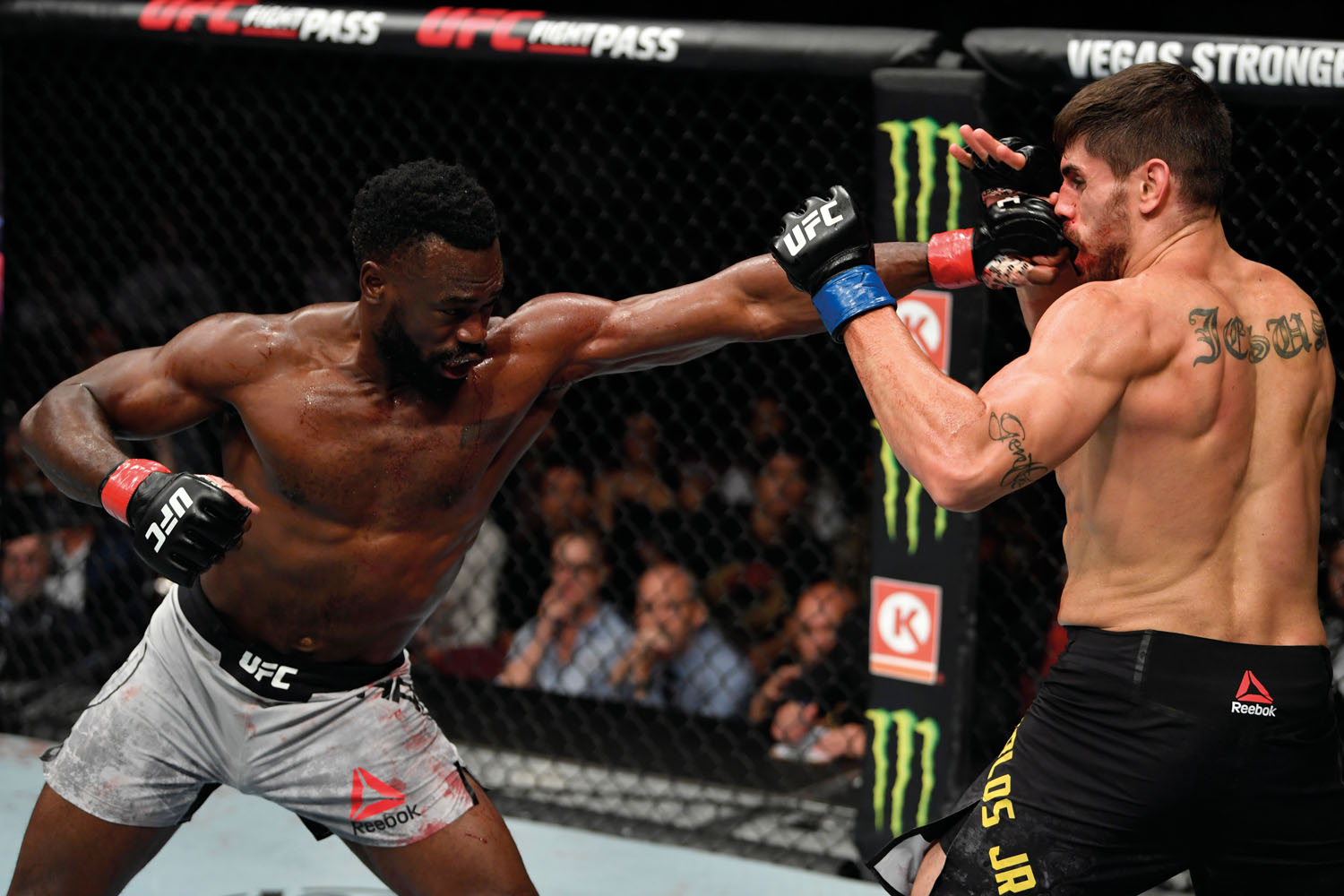 Jamaica’s Uriah Hall (left) is already in the UFC, the rest of the region is eager to follow. Photo by Jeff Bottari/Zuffa LLC/Zuffa LLC via Getty Images

Bharat Ramoutar marvels at the tremendous ability of some of today’s athletes. “We have this guy Omar Smith, from Rough House, I think he has a brilliant future. He’s a good striker, he’s a Pan Am kickboxing champion, and in MMA he recently won a title against a guy from Ireland. He’s young and aggressive and his coach is really doing a good job.”

Ramoutar cites Keron “Natural Bourne Killer” Bourne, 35, and Joash Walkins as the pride of local fighters. Local promoter and MMA president Jason Fraser, who has been pushing the sport for over five years, agrees that the nation is capable of producing top-quality fighters, but also that that extra bit of support is required.

“If the sport is given the desired respect and support, we can produce a lot of champions,” Fraser says. “We need equality in sport in T&T, and a tier system based on performance, because we do well every time and we haven’t received the kind of respect or support that we deserve. In six years, we have won a total of 133 medals, and the last two local events were broadcast live on television across 34 Caribbean countries.”

Fraser’s dedication and involvement in the sports of MMA and Sambo began six years ago. “T&T is the first country in the Caribbean to be a part of the international federation,” he points out, “and I am the development representative for the Caribbean. ‘Ruff ‘n Tuff’ MMA League was born as part of that, they have done many events in T&T, and we have now expanded in the Caribbean.”

Red, white & black . . . Dwayne Hinds (right) has set the path for other T&T fighters to follow. Photo by David Wirawan

T&T in the UFC? Jason Fraser, who currently holds administrative and developmental positions regionally and internationally in both sports, is in no doubt about the large pool of talented athletes available locally. Nor is international referee and former UFC fighter Herb Dean, who was amazed by the skill level here when he visited last year. Aa an optimistic Fraser puts it, “We have athletes than can reach the UFC level and very soon. Keron Bourne is striving to become the first athlete to bridge that gap.”

Success is impossible without challenges, and MMA, competing against popular sports such as cricket and football, still struggles to attain the necessary financial backing. “Funding has always been a problem,” Fraser says, “but we have managed to endure by hosting boat rides and other fundraising initiatives. However, the Russian Federation, through the international federation, has been our major sponsor, and we are very grateful to them.

“We also need a home for combat sports, because we have a lot of martial artists in this country. A national training or high performance centre is needed.”

He hints that ex-WWE star Ronda Rousey, whose mother visited T&T in 2017 and whose great-grandfather was born in Trinidad, will be arriving on our shores soon to do a reality show. MMA royalty on local soil could be just the right impetus for the sport locally, as the Pan Am Championships come here in 2021, bringing some of the best in the region for an ultimate showdown.

Let’s hope our boys are at the forefront, delivering gold on home soil and reminding doubters that we can take MMA to the big stage.