Rhythm of a People

The spirits of the ancestors and the audience were lifted by the energetic line-up at the Pan African Concert and Tribute to Ella Andall at the Lidj Yasu Omowale Emancipation Village on Saturday night. Masses of people turned out for the concert and tribute to the Caribbean queen of song.

With less than adequate seating space, the audience made themselves comfortable swaying, clapping, tapping and bopping to the African rhythms flowing from the lively artists.

Local and international acts from South Africa, the United States and neighbouring islands worked the stage. A collaboration of some of the country’s leading drumming groups opened the show, which got off to a late start. Drumming with the energy of a powerful call, they revived the restless audience with beats of liberation.

The concert was overflowing with expressions of unity, peace, thanksgiving and love. Love for dance, song, drums, and — above all — Ms. Ella or Sister Ella,­ as people who had a close relationship with her affectionately called her.

Ms. Ella has been in the music business for more than 40 years, performing around the world — in Africa, the United States of America and Europe as well as at home in the Caribbean. Her songs have always had a deep-rooted message. A humanitarian at heart, Ms. Ella has written and sung songs of heartache for a nation, uplifting a people, and nurturing a wandering soul. The audience’s love and respect for her was undeniable.

Lorraine Klaasen, long-time friend and musical sister, sang and danced to a few of Ms. Ella’s songs as well as her own. The vivacious Klaasen moved the crowd with her Township-style music. Her African dance choreography, acoustics and animated facial expressions kept the audience well entertained. She also taught the audience the dances and hooks to other hits including “Pata Pata”, “Ngiyabonga” and the “Click Song”.

Klaasen is the daughter of the legendary South African jazz singer Thandie Klaasen. Often invited to perform here, Klaasen has called Trinidad one of her homes, especially because this is where Ms. Ella lives. 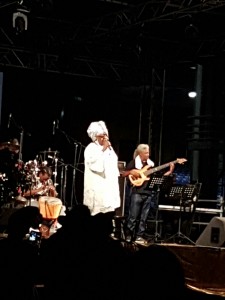 Ms. Ella once described herself as an artist who is here to teach and to heal. Her mere presence touched Singing Sandra, who was battling a bout of chikungunya. Unable to move or sing like the powerhouse she usually is, she apologised to the audience and suggested that if she got closer to Ms. Ella, she might be able to get some energy.

Feebly, and with bare feet, she held on to the railings of the stairs and walked at times unassisted to reach Ms. Ella, who was sitting front and centre in the audience. She embraced her sister, and started to sing again as if a bolt of lightning had recharged her. In jubilation the few seated audience members got to their feet and moved as close to the stage as possible.

With hands swaying and feet tapping, the audience joined in singing with Singing Sandra. Many were dressed in traditional African attire, making the village look and feel like a place where tribes had come together to celebrate in thanksgiving. The energy was enchanting, the ancestors were alive, and the celebration of Emancipation was in full force.

Ms. Ella not only received an overwhelming tribute but also a gift presented by Mr. Khafra Kambon, Chairman of the Emancipation Support Committee. In a very brief address Ms. Ella said, “As we go from generation to generation, I salute all the women and men. God bless all of you and thank you very much.”

Read more about Ella Andall here, who we profiled in Caribbean Beat back in 2007.