Roger Gibbon was winning at will in the mid to late 60s, taking double Commonwealth & Pan Am gold, with a World’s bronze thrown in for good measure. A seeming cert for an Olympic medal in 1968, a miscalculation in his preparation denied him his dream. With little financial support he promptly retired with that one Olympic regret, at the age of 24. Sheldon Waithe looks back at the remarkable career of one of the Caribbean’s most decorated athletes 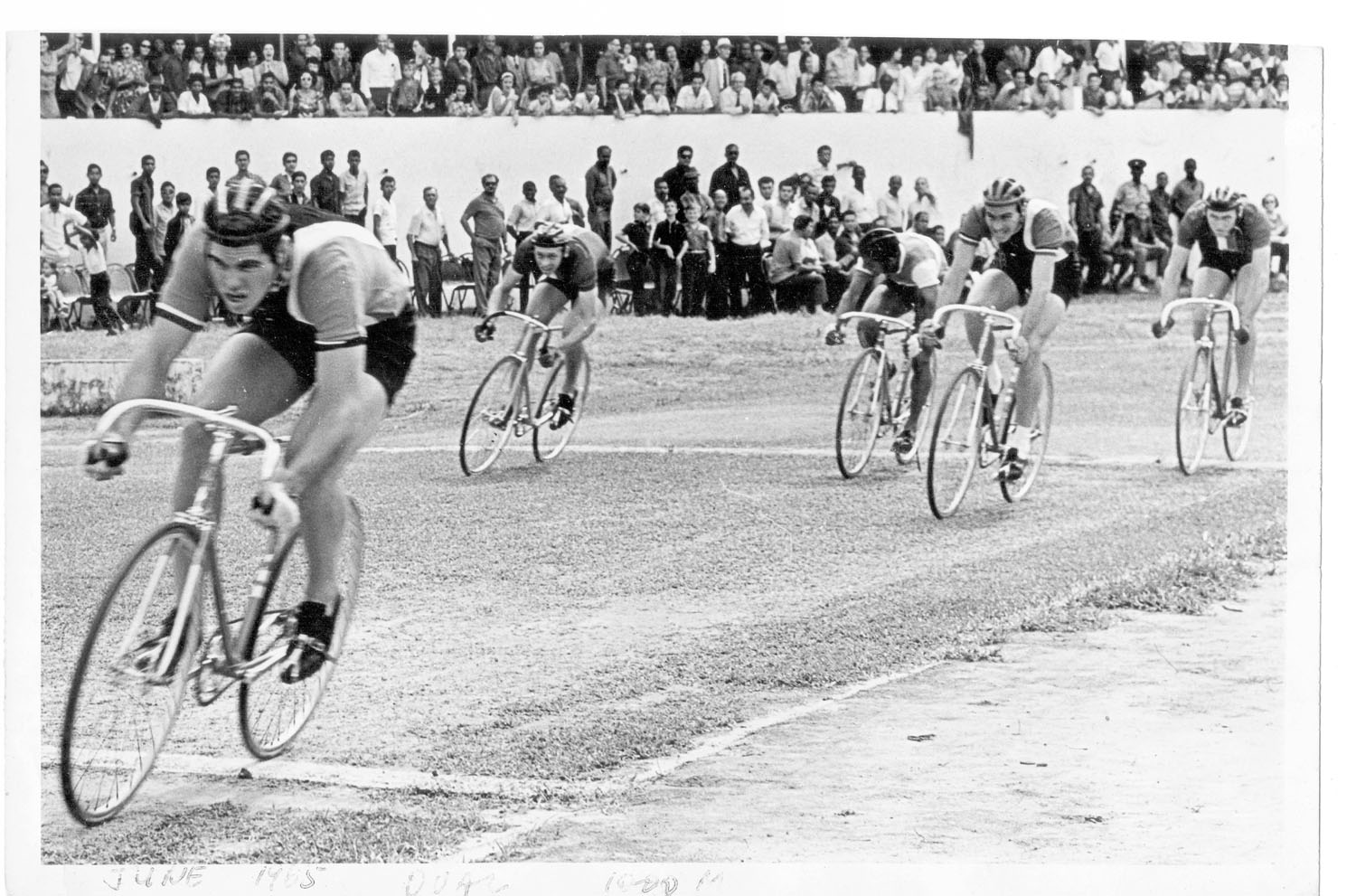 As Nicholas Paul streaks across the line to light up the Bolivian results board with a new Flying 200M world record, thoughts turn to “the little country that could”. T&T’s cyclists are excelling on the global stage in spite of constraints on their preparation, equipment and funding, in a sport where a thousandth of a second makes the difference between a medal and a “hard luck” pat on the back.

There is a considerable degree of support now, though. T&T’s current elite cyclists are full-time athletes with a full-time coach, and they have a velodrome to train on. But think back a bit: imagine donning the red, white and black skinsuit at the biggest Games, with no velodrome to practice on, living a monastic training existence that reminded your family daily of a tragic loss, lining up against competitors with ten times the infrastructure; and then, regardless of all this, coming home with a bucketful of medals.

Defying the odds takes “bad mind”, and once he lined up on the track, Roger “Golden Boy” Gibbon had that in abundance.

Local hero “The last race I rode at the Oval, it must’ve been fifteen thousand people there”. Photo courtesy Donna Gibbon

Roger Gibbon was a serial winner. Whether he was blazing the grass track at the Queen’s Park Oval in front of packed stands (“The last race I rode at the Oval … it must’ve been fifteen thousand people there”) or on the indoor wooden bowls of Europe, he was in high demand across the globe.

For a training monster like Gibbon – “seven days a week, Christmas Day, Carnival Day, Easter Day, rainy day” – a packed calendar suited him perfectly. There were no training races: if he was on the start line, he was there not only to win but also to win smart. “I wasn’t winning my races by five lengths, I would just beat you on the line because I have more races to come in the day.”

In that pre-globalisation era, training information was limited, so when Gibbon arrived at his first major competition, the 1962 Commonwealth Games in Perth, his knowledge was as green as the host’s flag, and so was his experience. “It was the first time that I rode on a banked concrete track, it was a major factor. You would be pedalling and your foot hits the banking and before you knew it you were at the bottom of the track. Before the actual races I would have a few burns all over.”

But he observed the rigorous regimes of the opposition and adopted them. “I was never advised on what to do and what not to do. I did what I thought was best; go out there and ride harder than anybody else.”

Where track sprinters now spend half of their training time in the gym, Gibbon recalls: “I never put a weight on my shoulder. I didn’t know what would help. I never had a coach for one single day.” Gleaning information from others proved ineffective: foreign coaches probably thought that if this upstart was this good, armed with just raw talent and bad mind, he would wipe the floor with their riders if he could maximise his preparation. 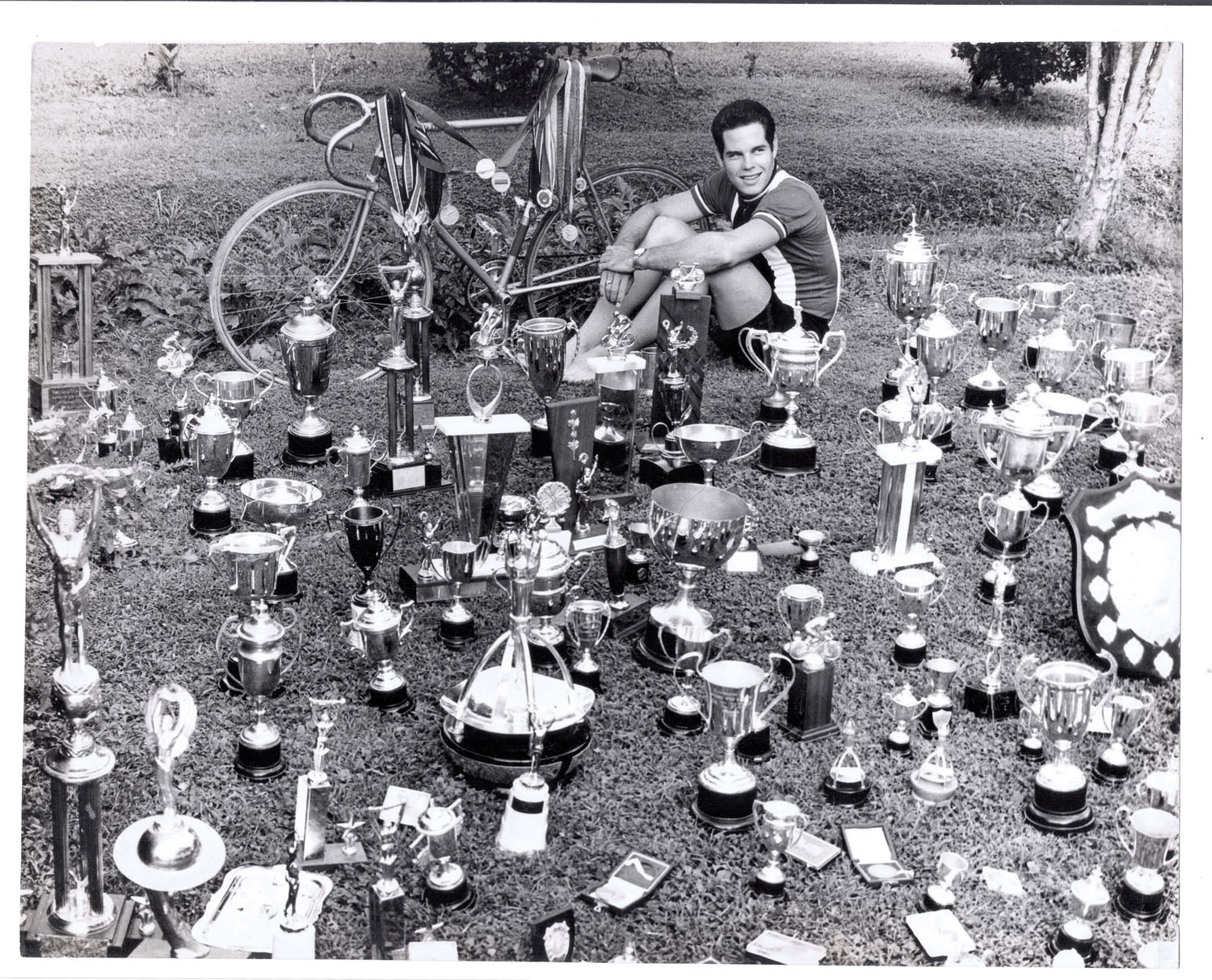 To the victor, the spoils. Photo courtesy Donna Gibbon

In most cases, Gibbon did just that, embarking on a post-Perth run that saw him dominate regional racing and reap almost immediate rewards for his rigorous training, with a gold medal in the sprint at the 1963 Pan Am Games in Brazil, and silver in the kilometre time trial. Despite T&T’s burgeoning fete scene, Gibbon eschewed the partying and liming. “It goes back to commitment. It depends on where you want to see yourself and what sacrifices you are prepared to make; then the discipline will follow.”

And his purpose was clear. “I used to love to hear the anthem play, go onto the podium and see your flag raised, I loved all of that.”

He maintained his supreme focus in spite of tragedy – losing a sibling due to the same training that fuelled his desire to be the best. “On that afternoon, he and I left home together, there was a flood by Trincity, I decided to turn around and go home. He continued through the water … and he never reached home. It must’ve been traumatising my parents every time I left home to go riding.”

Tokyo 1964 was a further step up the ladder, cementing his place among the world’s elite (and against athletes who did not hold down full-time jobs), placing eighth in the kilometre time trial. The Golden Boy now shone brightly, hitting the European circuit, extending his craft and leading the way for T&T at the 1966 Commonwealth Games in Jamaica with golds in the sprint and kilo – “my favourite because my mother and wife-to-be were there.”

His invincibility extended to the 1967 Pan Am Games with a further two golds in the same events. And he was not done yet, travelling to the World Championships in Holland, on crazily good form, to take bronze in the kilo.

Gibbon then undertook a reconnaissance trip to the scene of his next target, the velodrome to be used at the 1968 Olympics. He rode a kilo TT and broke the world record by a full second, though it was not ratified, being outside competition. He was now the outstanding favourite for the Olympic kilo.

There’s an unmistakable poignancy when he speaks about 1968 and the effects of altitude. “If I had to do it all over again, I would arrive in Mexico City the day before the kilometre. Had I flown in the day before the kilo I would have owned the world record and the gold medal. I was better than the winner. I missed an Olympic medal by three hundredths of a second.”

He finished in fifth place, blacking out as all the competitors did after crossing the line in the rarefied Mexican air.

For seven years he had been an international cyclist defying the odds, making sacrifices as well as headlines. Now 24, he made the decision to retire, and was as resolute as his trajectory to the top. “With all the fame you possess, you still have to pay for groceries. I was racing abroad and existing on $5 a day, including meals!” Did anyone try to change his decision? “No, because I didn’t discuss it with anybody.” That single-mindedness again.

T&T still has not won the Olympic cycling medal that Gibbon sought, and it has taken the accumulated haul of five different T&T cyclists to get close to his total Games record (none have replicated his Commonwealth gold).

“Golden Boy” ensured that the little country that could, actually did. He blazed the trail that other T&T cyclists have followed with aplomb; and it would be the most fitting outcome if T&T finally achieves that cycling medal in Tokyo next summer, the place where Roger Gibbon first put his tyre on the Olympic start line. 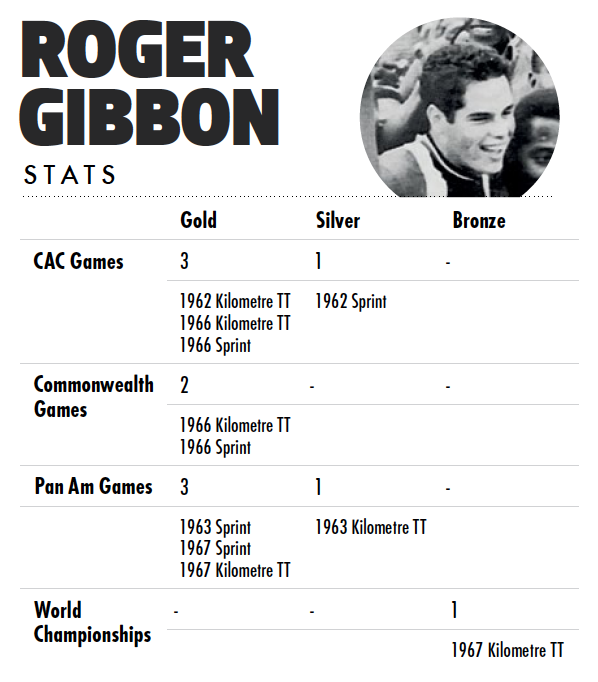