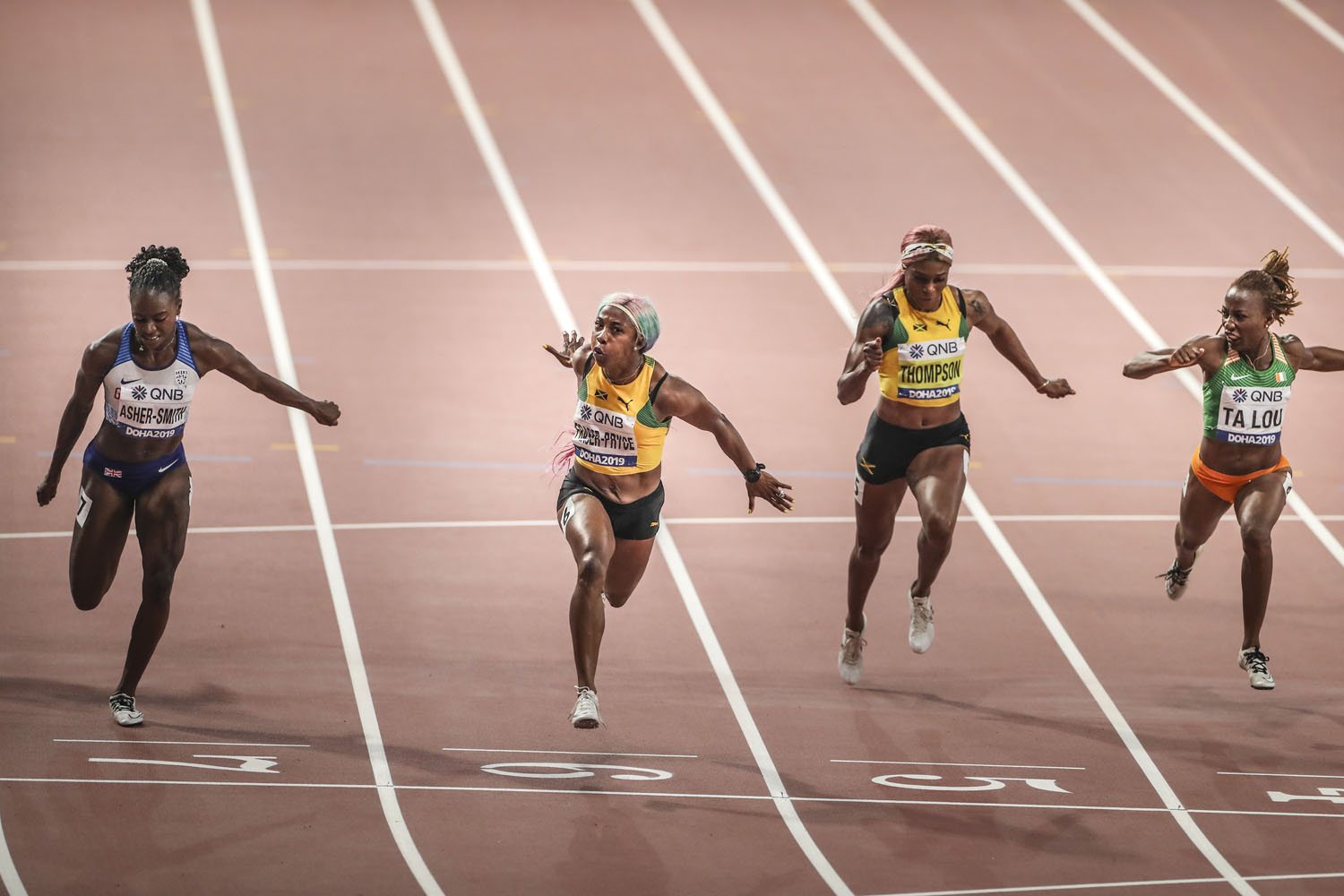 PROFILE: SHELLY-ANN FRASER-PRYCE: the fastest woman in the world

Shelly-Ann Fraser-Pryce set the pace (literally) for Caribbean female athletes, beginning the dominance of Jamaicans in women’s sprinting. Then she stopped to have a baby; now she’s back and on top of the world. Vaughn Stafford Gray takes an in-depth look at the always smiling, always affable Fraser-Pryce and her determination to reclaim that top step of the podium 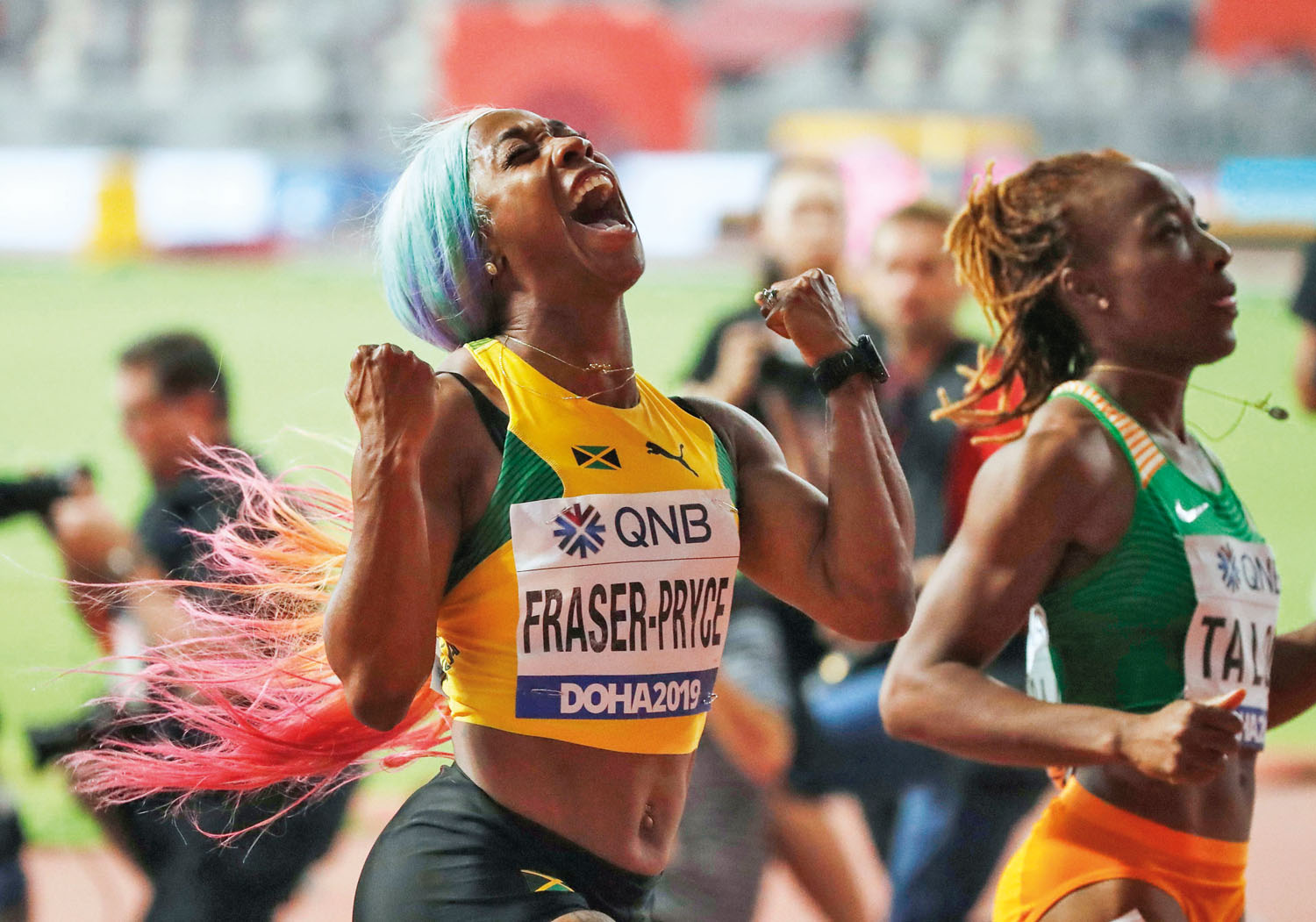 For 10.71 seconds on Sunday, September 29, 2019, the whole of Jamaica reverberated with excitement. The nation watched compatriot Shelly-Ann Fraser-Pryce storm down the track at the IAAF World Championships in the Qatari capital of Doha, and not only snatch the 100m gold medal but achieve a fourth individual world title, which was (fun fact) 0.01 seconds short of her personal best.

Many people were speechless. Between the shouts of joy, few sober words emerged. But overhearing an elderly man say “No sah, a dat gyal can run!” was, to put it mildly, memorable.

To say that by medalling at the World Championships Track & Field, treble Olympic champion and mother Shelly-Ann Fraser-Pryce proved naysayers wrong, is giving too much power to naysayers. Fraser-Pryce is, as the kids say, everything. When she emerges on the track, electric energy is immediately palpable. You can liken it to the force that possesses tennis fans when Serena Williams gets ready to serve. 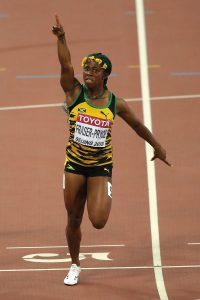 But where to begin?

How do you effectively write about a national treasure in 1,000 words? How do you wax poetic about a track and field athlete who, like no one since Marlene Ottey, has kept the world besotted with every life moment, every breaking record? How can a few pages encapsulate a dynamic woman who keeps us guessing as to her next moves, including what hair colour she’ll rock on the track?

The world is full of rags to success stories. However, Fraser-Pryce, who emerged from the bowels of a tough Kingston inner-city neighbourhood, Waterhouse, has stayed close to her upbringing. She has never shied away from her origin story and has eschewed all the you-made-it-out badges of “honour”.

She scored her way to Olympic glory at 21 (Beijing 2008), following that debut by medalling at the 2012 and 2016 Games, becoming the first woman in history to win three consecutive Olympic 100m medals.

On Sunday, September 29, in Doha, she received yet another title: the fastest woman in the world. 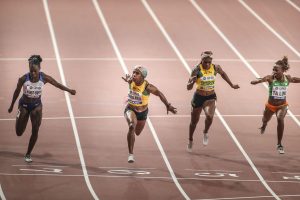 The comeback is complete. Fraser-Pryce reclaims the World’s 100m in Doha, 2019. Photo by Serhat Cagdas/Getty Images

After Fraser-Pryce’s win in Qatar, her face and achievement dominated the news cycle. And not just in the Caribbean. Fraser-Pryce is global. Now, when someone utters the name “Shelly-Ann”, you don’t have to ask “which one?” There’s only one, just as there’s only one Usain.

And, like Bolt, Fraser-Pryce has parlayed her fame into altruism, activism and entrepreneurship.

In 2010, she was named Jamaica’s first UNICEF National Goodwill Ambassador, and in this role championed the rights of mothers and children.

In one of her UNICEF blog posts entitled “All Jamaican Mothers Deserve Baby-Friendly Hospitals”, Fraser-Pryce wrote: “When I had my child I was fortunate. There was a lactation specialist who came immediately to my room to talk to me about breastfeeding, about the advantages of the breast, engorged breasts, mastitis, latching and stuff like that … That’s what we need with baby-friendly hospitals – having all that information in front of us so that we can make the right decisions.”

She’s also the founder of the Pocket Rocket Foundation, which works to alleviate the financial strain experienced by high school athletes whose families are financially strapped, and helps them to remain in school and continue with their training. In 2013 Fraser-Pryce capitalised on the popularity of her colourful hairstyles and launched a salon – Chic Hair Ja.

Fraser-Pryce is a dynamic and multi-faceted woman. Her megawatt smile and warm energy are indications of a woman who is content with herself. When she announced her maternity leave, the nation counted down the months until she gave birth to her son Zyon in August 2017. Motherhood had its joys and lessons, but Fraser-Pryce, just like when she’s approaching the starting block, was determined to also excel at this.

Two-year-old son Zyon joined Fraser-Pryce on the Doha victory lap, as she celebrated eclipsing Great Britain’s Dina Asher-Smith in the 100m finals. At the post-race media junket, Fraser-Pryce noted, “I can’t believe it. I worked so hard to be back … Zyon and my husband have been my strength. When everybody else doubted me, they never did. It’s down to them that I am here again.”

And it is interesting to note that in 2018, a mere 11 months after giving birth, Fraser-Pryce already clocked 10.98 to rank 10th in the world. 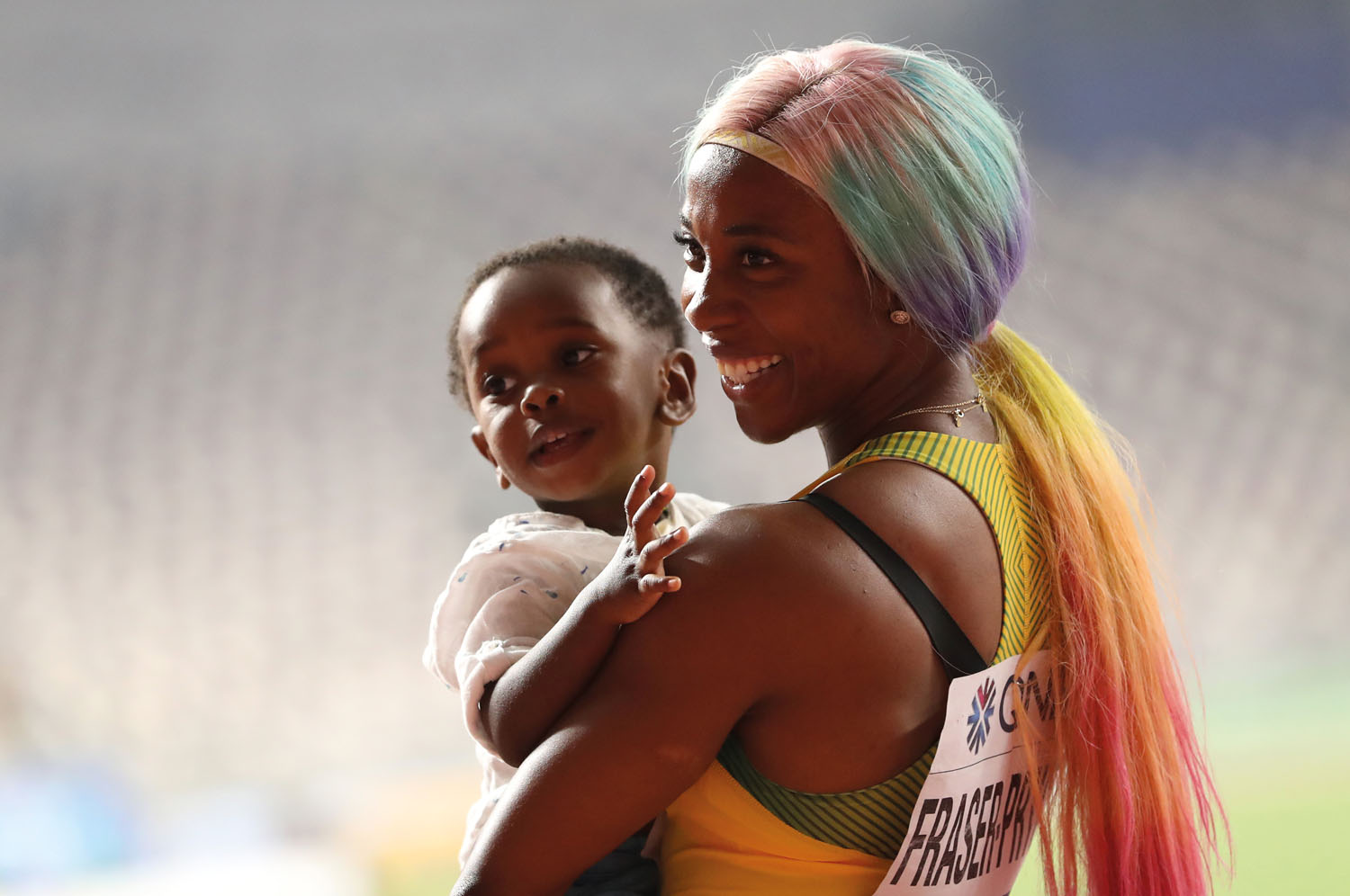 Fraser-Pryce’s career over these last 12 years has been a carnival of athleticism and triumph. Whenever we wonder if she can do it again, she smashes a record to smithereens and unknowingly makes us to examine ourselves, locate the molecule of doubt, extricate it, and beg forgiveness. With every move that she makes, she does not disappoint.

One could say that Fraser-Pryce is an outlier. In the sports world, the most successful athletes have a hard-luck story. But there is something that separates Fraser-Pryce from her compatriots. What is it, you ask? Confidence.

Not the kind of confidence that teeters on bragging. And not the kind of (false) conviction that oozes from the pores of a Silicon Valley start-up CEO who is hell-bent on “disrupting” some industry or another. Fraser-Pryce’s confidence can best be summed up by a mantra popularised by the author (and courage and vulnerability scholar) Brene Brown: “No matter what gets done and how much is left undone, I am enough.”

If there’s one thing that Shelly-Ann Fraser-Pryce intrinsically knows, whether she’s breaking world records, raising a family, running a foundation or being principal of a business, it’s that she is enough. 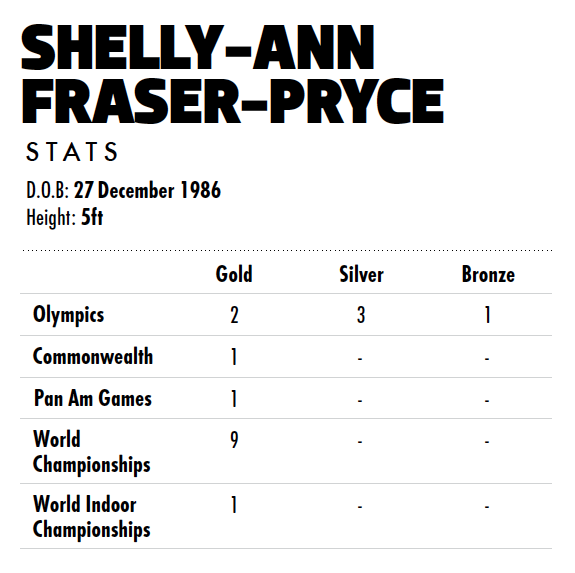