Established 30 years ago with lofty ideals, the intention of the Caricom Single Market and Economy (CSME) was to provide more and better opportunities for employment, trade and investment. What have we achieved over the past three decades? How can we get CSME right, in order to advance the region’s growth and development?

When the Caricom Single Market and Economy (CSME) was established in 1989, the vision was clear: we would create a single, regional economic zone, not unlike the European Union (EU), which would be an attractive destination for business and foreign investment. This would be facilitated by the free movement of labour, and supported by laws and regulations designed to grow intra-Caribbean and extra-regional trade.

Thirty years have since passed, and we are nominally closer to this goal. 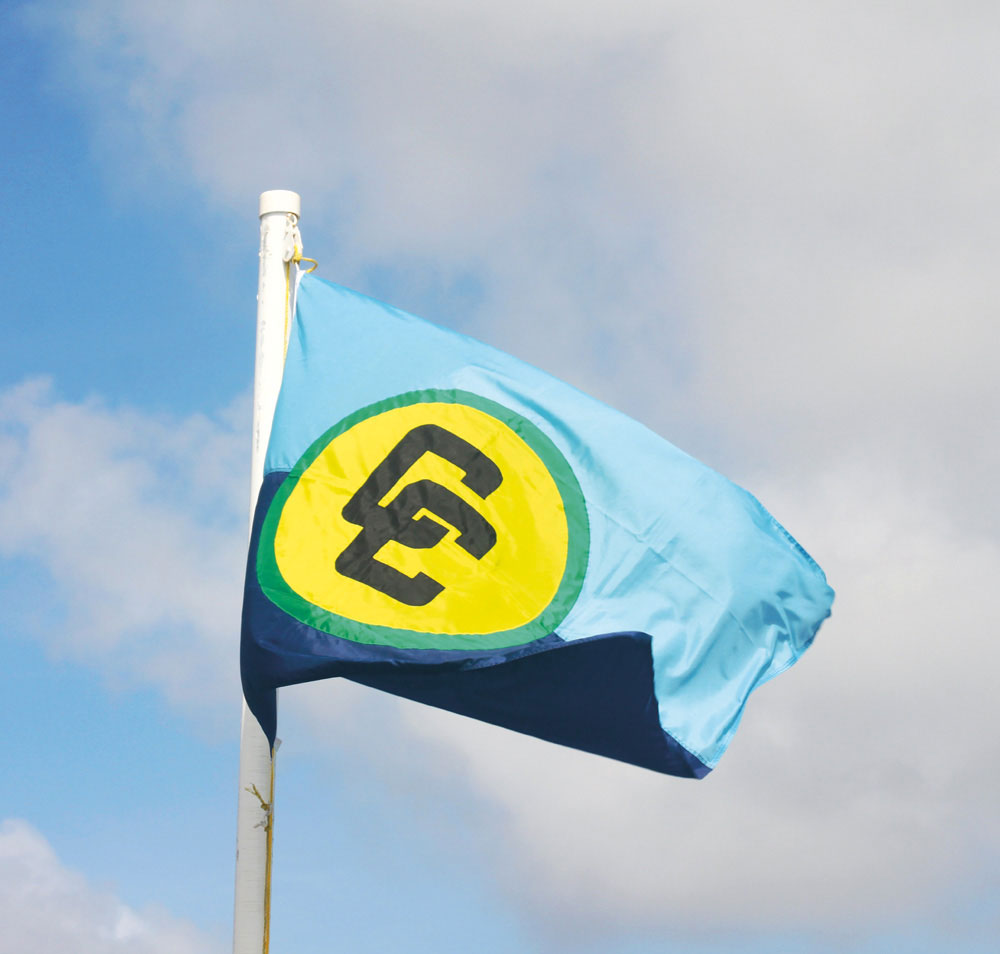 In the 1990s, immediately after the formation of the CSME, four of the larger Caricom member states – Trinidad and Tobago, Barbados, Jamaica and Guyana – simultaneously encountered serious economic difficulties. Dr Alvin Hilaire, then a senior economist with the International Monetary Fund, wrote an article reviewing the countries’ strategies for economic stabilisation.

Trinidad and Tobago and Jamaica both sought to address their difficulties with a range of remedial actions including debt reprofiling, major currency devaluations, public expenditure cuts, rationalisation of state assets, and intervention in the financial services sector. These measures came at a huge cost to their respective economies.

Barbados’s major sectors – tourism, sugar and manufacturing – were all declining, and the country faced several problems including potential defaults on foreign loans as foreign exchange reserves declined precipitously. To address these challenges, Barbados increased its debt, maintained its fixed exchange rate, and continued its expansionist policies.

Guyana, on the other hand, in trying to deal with its own difficulties, adopted a strategy which involved the nationalisation of major enterprises across a wide spectrum. This strategy eventually failed, and the country’s economy fell into recession.

On reflection, one can argue that the ambitions set out in the 1989 Grand Anse Declaration (for the advancement of the integration movement) were always going to be difficult, though not impossible, to achieve. Today, by and large, the CSME objectives have not been met.

While some commentators can justifiably criticise Caribbean governments for their lack of execution, one view is that it would have been incredibly difficult to achieve common market status while the larger economies in the trade zone were seriously afflicted by economic challenges. Out of necessity, these governments became internally focused on their individual economic priorities. It is arguable, then, that the interests of the wider group of member states would not have been aligned regionally – a pre-requisite for achievement of the CSME goals.

The return of sustainable growth in 2000 and beyond was then impeded by the 2009 global financial crisis. This affected most of the world’s more developed countries, and ultimately led to long periods of economic decline in Caribbean countries highly dependent on the offshore sector, and other countries vulnerable to external shocks.

Today, almost three decades since the formation of the CSME, many Caricom member countries are still experiencing challenging economic circumstances. This has been exacerbated in no small measure by the external pressures exerted by the EU and the Organisation of Economic Cooperation and Development in their efforts to regulate the financial systems of these countries. These issues and other internal pressures have resulted in the Caribbean states, with few exceptions, being unable to attract adequate levels of foreign direct investment; and economic growth is anemic at best.

So what does the future hold for small economies in a world experiencing trade wars, Brexit, and crisis in our neighbour Venezuela? How do small nations realise big plans in a world fraught with major geopolitical events? How will Caricom deal with these challenges, which have potentially disastrous consequences for regional economies?

These are challenges that affect citizens in all our countries; they require collaboration between businesses and governments in the region; they can only be addressed by doing things differently – by innovating. No longer can the Caribbean ignore the impact of these global trends and the potential debilitating effects on our economies.

As 2020 approaches and we continue to look to the future, it is imperative that our countries, despite lacking scale, develop bigger, bolder plans if we are not to be left behind. There is a unique opportunity for regional governments to work with the private sector to jump-start the realisation of the CSME vision.

First, we need to transform the public sector, the way we do business, and put the needs of our citizens at the forefront.

Globally, transformation is driven by four mega-trends currently disrupting the way we do business and how we compete:

These four T’s, together with climate change and aging demographics, are serious issues which governments in small, fragmented markets can face with a collaborative effort across borders and across sectors.

To realise the CSME vision, business and government must collectively embrace digital transformation as an imperative, not an option. This involves much more than just acquiring new technology. It requires an overhaul of organisational structures, governance, work processes, culture, and – most importantly – mindset. Without this new mindset, real progress will remain difficult to achieve.

There is sufficient empirical evidence to support the proposition that governments which effectively harness the power of digital transformation can create better outcomes for citizens.

The benefits of public investment in technology can be seen in the example of Estonia. One of the smallest countries in Europe, with a population of 1.3 million, Estonia only gained independence in 1991. Since then, it has transformed itself, through innovation in the public sector and investment in technology, from a country with little public infrastructure to a leader in e-government.

It is estimated that 99% of all instances where Estonian citizens interact with their government are through digital technology. E-government can provide services more effectively and efficiently, find new solutions to policy challenges, commercialise some public services, and develop new sources of revenue.

Like Estonia, CSME investment in digital transformation has the potential to transform the entire region.

In summary, the Caribbean cannot continue to inch forward step by step and still keep pace with today’s world. The CSME will only accomplish its ambitious goals if businesses, governments and civil society are prepared to collaborate, reinvent themselves, and build a single market and economy that is fit for the transformative age. That’s how we can get it right.

The CSME set lofty goals in 1989, and the limited progress to date forces us to ask some uncomfortable questions. Are we motivated to take the necessary steps and actions to build a real common market, or are we still guarding our individual castles? Can the Caribbean emerge stronger and more unified despite differences in size, sectors, opportunities and challenges?

The answer is YES. But the goals of the CSME can no longer be set in stone. They need to be supported by a dynamic organisational structure that is autonomous, well-funded, and backed by governments which recognise that, in a rapidly-evolving environment, the economic models of yesterday may not be relevant tomorrow.

The fourth industrial revolution has arrived. The time to begin the journey is now.

All 15 countries below are Caricom member states. These are the 12 full CSME member states: Antigua and Barbuda, Barbados, Belize, Dominica, Grenada, Guyana, Jamaica, St Kitts and Nevis, St Lucia, St Vincent and the Grenadines, Suriname and Trinidad and Tobago. Montserrat requires entrustment (approval) from the UK. Haiti is a partial CSME participant, with full integration carded for 2020. The Bahamas is not a participant. 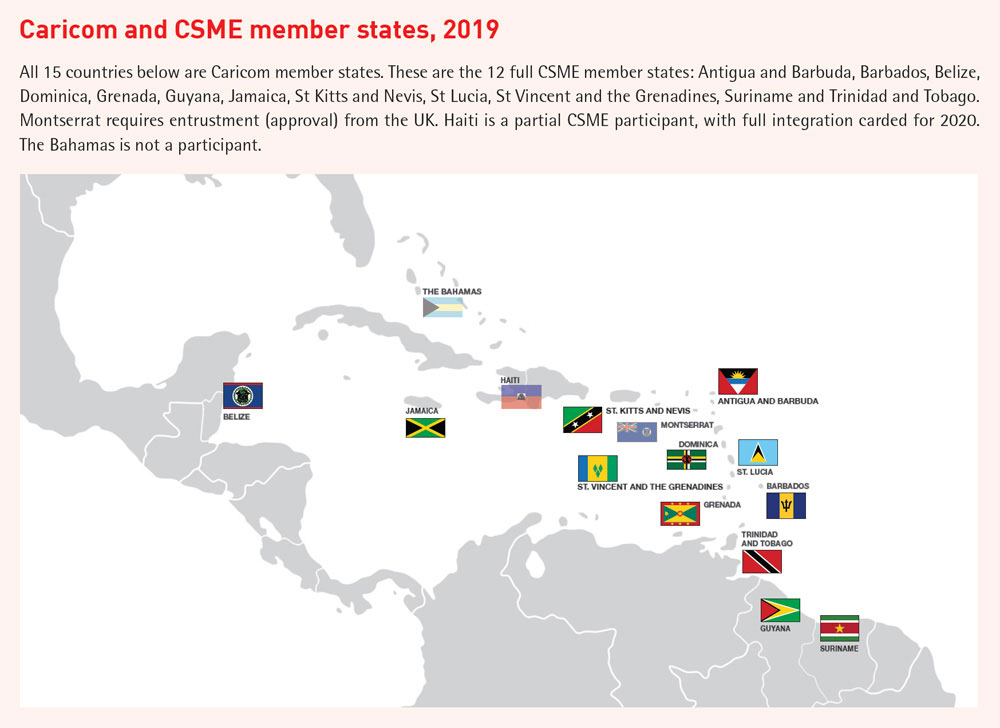 What is the CSME?

The CSME is a single large economic space, created through the removal of restrictions and resulting in the free movement of:

Key elements of CSME are:

The decision was taken in 1989 to establish the CSME in order to deepen the integration movement.

On 1 January, 2006, the Single Market component of the CSME came into being, initially involving Barbados, Belize, Guyana, Jamaica, Suriname, and Trinidad and Tobago.

Heads of Government agreed to the issuance of a Caricom passport by member states as a defining symbol of regionalism.