The Power of the Word and Words of Power in Tobago 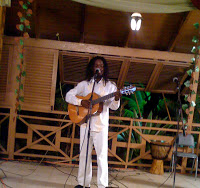 “It is a gathering where poets, other spoken word artists and musicians express their inner thoughts and feelings about whatever they have pondered over in the past. The setting is a very cozy one, with friends, those who will become friends and strangers who just shouldn’t be.”

These words (as written by Jason Arthur, one of the four founding members of Lyrical Lounge) do little to describe the intimate and soul-moving experience that is The Lyrical Lounge. I spent a cool Saturday evening, in the earthy, rustic setting of Ren Mar’s Restaurant, on the sandy shores of Pigeon Point Beach, Tobago, listening to words of power and experiencing the power of the word.

The Lyrical Lounge is produced by Dunstan DeNoon, Jason Arthur, George Daniel and Meisha Trim. Dunstan holds both an undergraduate degree in accounting, and an MBA. In his regular life, when not promoting the lounge, he’s a tennis coach and one of the directors of a bar called The Signature Lounge. Dunstan is a proponent of the oral traditions. But of most importance is the fact that he is one of the two people who came up with the idea to have a poetry event in Tobago (the other being his friend Lyndy-Ann Parks).

Jason is a former English Literature Criticism major, and is the marketing person and the MC at the events. George is a veterinarian by profession, who has always been involved in social networking and event management activities. The social interaction and promotion of local talent at The Lyrical Lounge appeal to George’s passions and fuel the enthusiasm that he and the other 3 directors have for the organization.

Meisha, a former finalist in the Miss Trinidad & Tobago Pageant, holds a BA in Communications, and her return home to Tobago has seen her being involved in community-based organisations and projects. The only female director of the nonprofit, The Lyrical Lounge Limited, Meisha is responsible for sponsorship procurement, media relations and business development of The Lounge.

The 20th of February was the closing show for a third and very fruitful season of the Lounge. To those who doubted that interest in a spoken word event was sustainable in Trinidad’s sister isle, this proves there there is, and also that the talent pool in Tobago is certainly a lot bigger than many thought. As word has spread, more people have become interested, both in coming and in performing.

From sultry, husky tones, to the brash vibrant flavours of voices, to mellow conscious vibes; from rapso, to bittersweet crooning, to stinging calypsos and intense monologues and angst-filled poetry, the imagery, symbolism and figurative language from the performers that night, spoke of exuberance and optimism, intense and sometimes quiet passion, and practical idealism, occasionally punctuated with humour. To repeat what director Jason has said in the past about other shows, for this show the “spoken word was a real person, with all her complexities, moods, concerns, and frivolities…This all made for an evening where even those with the most discriminating of literary tastes found something that spoke to them.”

Some of the artists on that night, from both Tobago and Trinidad, were: Keegan Maharaj, Korice Archie-Quashie, Brother B, Farmer Dan (in photo above), Muhammad Mukwali (in photo below), Collis Duranty and The Unlimited Soul Project, Nzingha Job, Mr Shaq (Dimanche Gras Finalist), Akilah Riley, Sophie Guillaume and Renee Vialva. 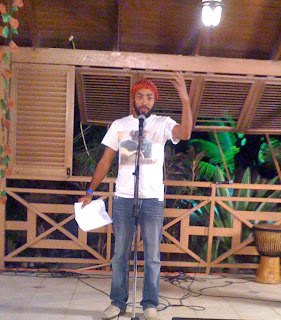 The Lyrical Lounge certainly fills a void in Tobago entertainment offerings. It speaks to that aspect of life and living that is simply not satisfied with the regular diet of cable TV sitcoms, talk shows, the rum shop lime, the sports bar or even the internet. The figurative and astral space that is The Lounge feeds the human spirit and soul in ways that bring people together to share and to inspire and to help us find our unique social niche. It is always great to watch the history of social and cultural changes in society, reflected in our oral traditions; to witness and be a part of a state of perpetual evolution, combining new ideas with older ones to create a sound and voice that’s unique to each generation. So whether you like poetry, or calypso, monologues or rapso, jazz or R&B, speeches or reggae, you’ll find it all at Lyrical Lounge. Hats off to the team of directors!

This weekend, The Lyrical Lounge goes to the Woodford Café, in Movie Towne, Trinidad. The show is going to be held this Sunday 7th March, from 4pm to 6pm. Don’t miss it.