We have a weakness for indigenous arts and culture, so it is our pleasure to support the return of these “salty ladies” to the Trinidad stage as Tony Hall’s celebrated play JEAN AND DINAH is revived this weekend at the Little Carib Theatre. 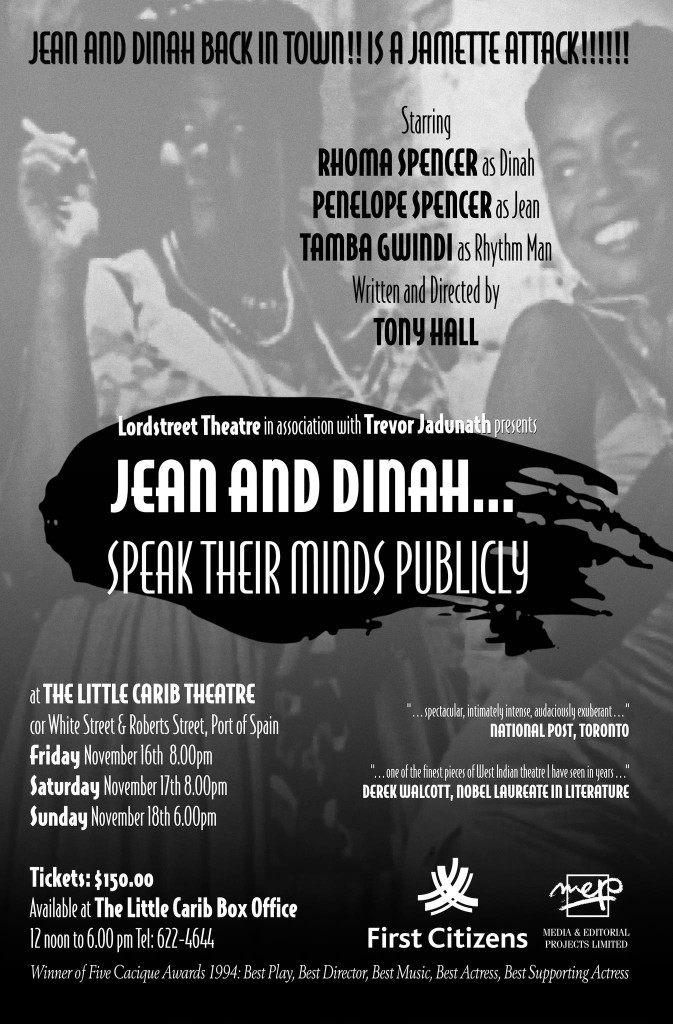 JEAN AND DINAH . . . [WHO HAVE BEEN LOCKED AWAY IN A WORLD FAMOUS CALYPSO, SINCE 1956, SPEAK THEIR MINDS PUBLICLY], starring the Toronto-based actress and director Rhoma Spencer as Dinah and actress, producer, writer and director Penelope Spencer as Jean, opened on stage in Port of Spain in November 1994 to rave reviews and five Cacique Awarads (Best Play, Best Director, Best Music, Best Actress and Best Supporting Actress).

Regarded by Nobel Laureate Derek Walcott as “one of the finest pieces of West Indian theatre I have seen in years”, JEAN AND DINAH has toured extensively since its Trinidad premiere, having been staged in the United States, Canada, the United Kingdom, and across the Caribbean (Guyana, St. Lucia, Jamaica, and the Netherlands Antilles). Even a French version of the play was performed successfully at the University of the West Indies Inter-Campus 8th Annual Foreign Language Theatre Festival in 2007.

Described by Toronto’s National Post as spectacular, intimately intense, audaciously exuberant ” JEAN AND DINAH is written and directed by Tony Hall, having been created from research and improvisations by Rhoma Spencer and Susan Sandiford. It is inspired by the classic Sparrow calypso “Yankees Gone” (aka “Jean & Dinah”), which brought the MIGHTY SPARROW to the pinnacle of the calypso world in 1956. The calypso itself was a male response to the influence of the occupying Yankees on local girls in the post World War II period.

It is Jouvay morning, the dawn of Carnival Monday and Jean comes to take her friend, Dinah, to play mas in the city as they have done for the past forty years. This year, however, Dinah is tired and ailing and does not want to go. Jean tries desperately to rally her into making their annual pilgrimage through the streets where they play sailor mas on Carnival Tuesday.

In the ensuing battle to get Dinah out of bed onto the streets of Port of Spain, both women discover things about themselves that shaped their lives. This play gives the women in Sparrow’s calypso a voice. Their stories take us on an emotional roller coaster of laughter, pain and sorrow.

In this 2012 Lordstreet Theatre/Trevor Jadunath production, JEAN AND DINAH comes back to Port of Spain to mark the 50th Anniversary of the independence of Trinidad and Tobago. The production runs at the Little Carib Theatre in Woodbrook Friday 16 and Saturday 17 November at 8pm, and Sunday 18th at 6pm.