Attempting to find a different view of Las Cuevas Beach on Trinidad’s north coast, we ventured along a road in Las Cuevas village unaware of the treasure that lay ahead of us.The treasure was a derelict fort and park that was tucked away around a corner. We arrived at what seemed to be the end of the road and I got out the car in order to photograph some sorrel growing on a small slope. I have seen sorrel before of course – at Christmas time the fruit is a constant sight being sold in heaps by roadside vendors – but I have never seen it actually on the plant. Close to the sorrel was a sign with information about the Fort Abercromby but we were perplexed as it looked like there wasn’t much beyond that point.

Heading back down the road we ran into another sign that mentioned the development of the Fort Abercromby site into a historical park in 1994:

We invite you to fish on the rock, sight see from the magnificent lookout points, relax on the benches, enjoy local dishes from the cafeteria…

Our interest was now piqued and we stopped a man to ask him if the fort really did still exist. With an enthusiastic yes he also informed of us that from the lookout was a terrific view of Las Cuevas. We turned the car around excitedly, parked by the sorrel plants, and started trekking down the bumpy dirt road.
We soon saw a sign to the lookouts, and we ascended the concrete steps, walking through shrubs, evergreen trees and tall grass. After the main set of steps there were two landings surrounded by trees through which you could glimpse Las Cuevas in the distance. We could not see uninterrupted views from up there as the whole area was over grown. I wondered if perhaps when the park was created the view was clearer. However, the landings were so peaceful and a great spot to sit and read. Once you are careful about not going too close to the edge, as one side was a cliff, this would make a great liming spot for a group of friends. I could even see a view of ‘The Rock’ from up there, and a few men were fishing from it.
Back down we continued along the dirt road and soon encountered the cannon. There were only two and the rusted remains were poised on a wall, pointing to a large expanse of ocean. From here I could see parts of Las Cuevas’ long stretch of beach again through some trees and low brush. We continued on, as we were eager to find ‘The Rock’, and after descending a few partly hidden steep steps we were on it. Saying a quick greeting to the men we sat and marveled at the waves crashing onto the surrounding cliffs.
This tranquil site is a beauty to behold and the description of the refurbishment in 1994 makes it seem like the perfect weekend retreat. I can imagine poets to sunbathers to nature lovers enjoying the ambience of this site. How did they let the premises get run down? One of the fishermen said they loved coming there and were surprised more Trinis did not know about it. Even though the attractions listed on the sign are not intact, I would still suggest coming to visit, but definitely in a group as it probably is lonely most of the time. This site was a great adventure to discover, and is just another reminder that beauty lies just around the corner.

Sorrel growing on the slope 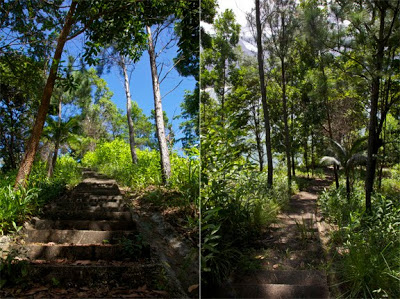 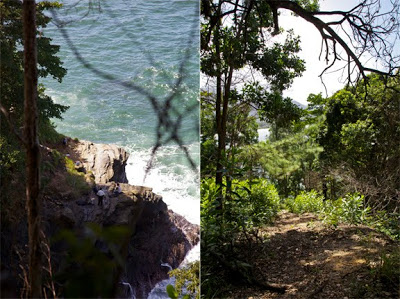 View from the lookouts 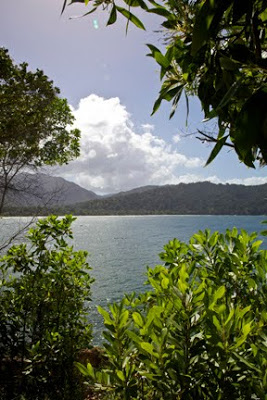 Las Cueavas beach in the distance 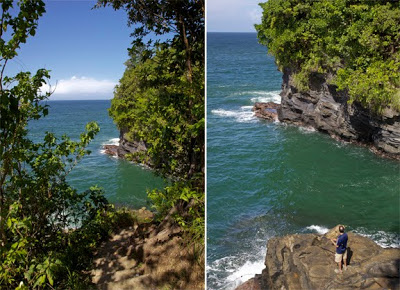 Looking down onto ‘The Rock’

Ariann is ready to reacquaint herself with and in some cases ‘meet’ Trinidad and Tobago. Follow as she travels to different places and interacts with a multitude of faces while ‘Discovering T&T’.